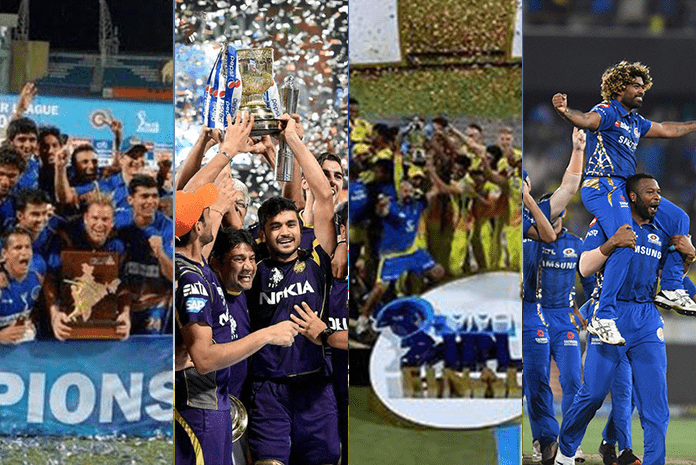 IPL 2020: Indian Premier League is around the corner, and everyone is excited about it. IPL will be refreshing for everyone amid COVID-19. As teams are giving final touches to their preparations for another spectacular season, InsideSport brings you 12 best moments from 12 editions of Indian Premier League. 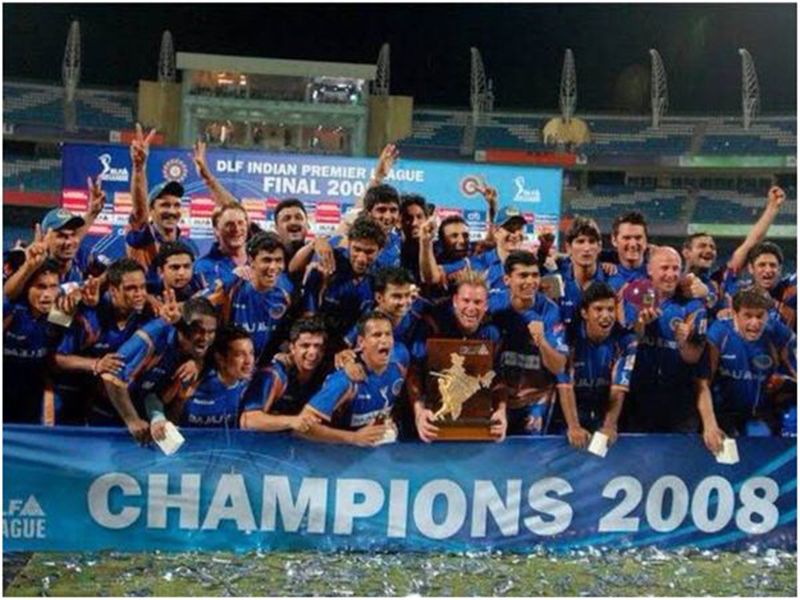 Rajasthan Royals were the underdogs the first edition of Indian Premier League. Captain by legendary spinner Shane Warne, the only big names they had were Mohammad Kaif, Sohail Tanvir, Graeme Smith and Shane Watson. However, as much as low-profile they were, the fighting spirit helped them beat Chennai Super Kings by three wickets at DY Patil Stadium. Shane Watson was the player of the season.
IPL 2009: Underdogs become champion 2.0 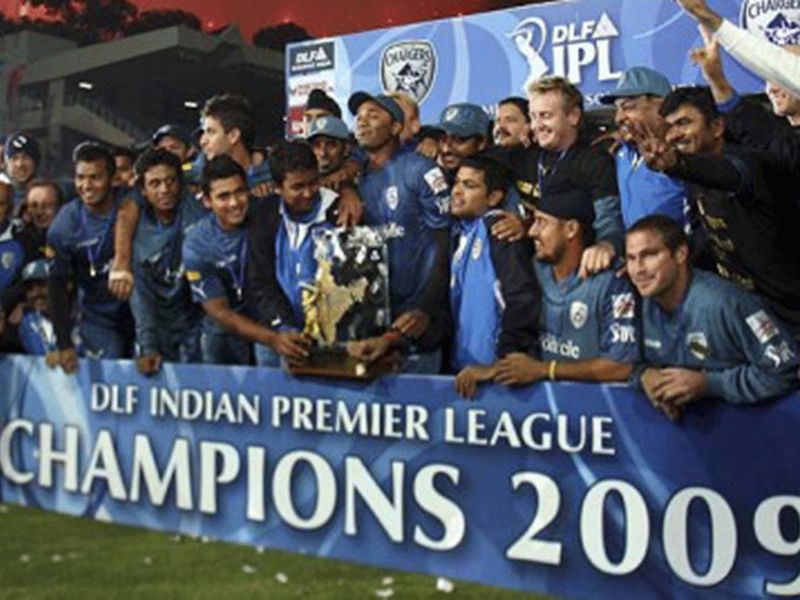 If there was one team which had the best players who suited for the T20 format perfectly, it was Deccan Chargers. The team from Andhra Pradesh boasted the likes of Andrew Symonds, Shahid Afridi, Harchelle Gibbs and Adam Gilchrist. However, it finished last due to off-form players in the playing XI. After the debacle of 2008, a new administration and support staff under Gilchrist captaincy, the team won the 2009 edition to everyone’s surprise. It beat Royal Challengers Bangalore by six wickets at the Wanderers Stadium.
IPL 2010: First of man 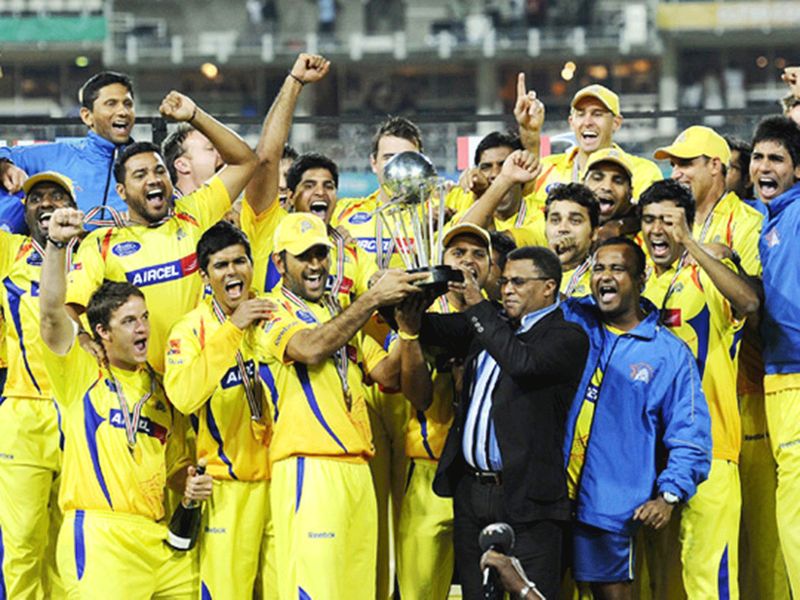 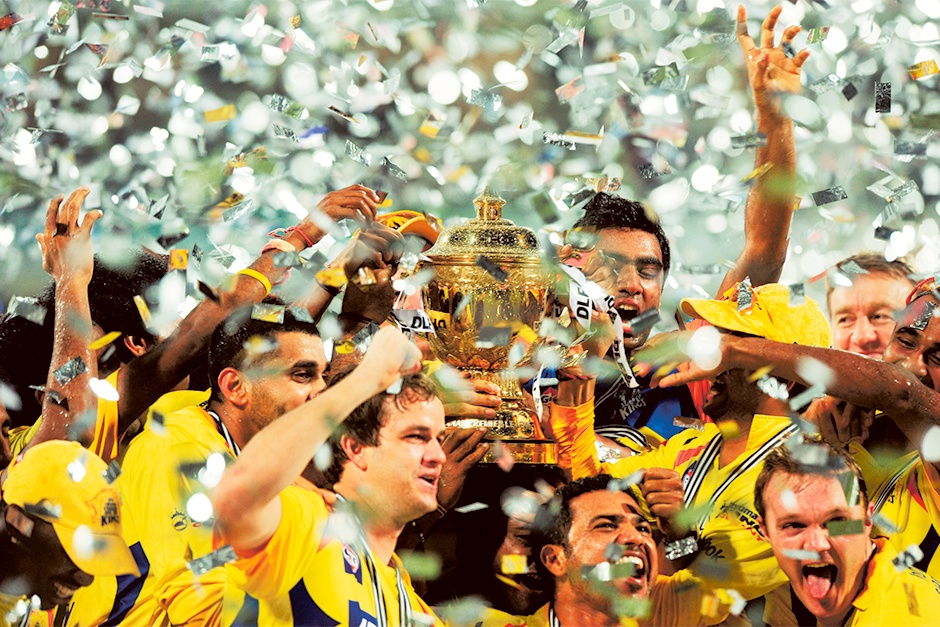 Chennai Super Kings is the only IPL team till date to have successfully defended its title, thanks to MS Dhoni’s masterstroke of handing the new ball to R Ashwin against in-form Chris Gayle. The Windies batsman was the leading run-getter in this IPL and had single-handedly transformed Bangalore’s fortune in the tournament. Dhoni had trusted his leading spinner to get the team an edge in the finals, and his gut-feeling as always worked. Ashwin’s prowess of studying the game and that mystery ball proved too much for Gayle and he walked to the pavilion in the first over. From there it was all yellow at the M.A Chidambaram Stadium. CSK won by 58 runs.
IPL 2012: Finally! trophy for SRK 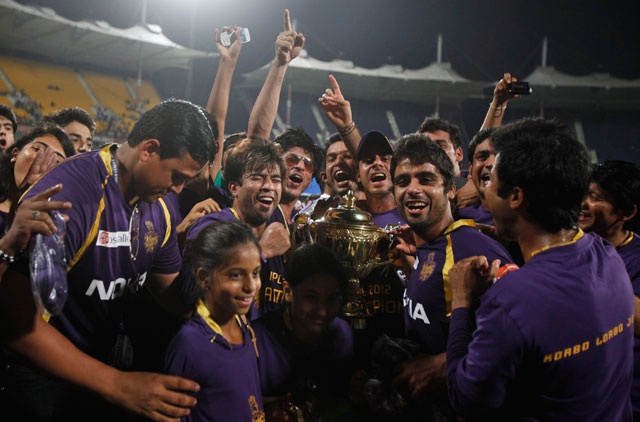 When IPL kicked off in 2008, Shah Rukh Khan was the used as the marketing face of the event. However, the Bollywood star never could get the taste of trophy. But in 2012 under Gautam Gambhir’s captaincy, SRK had finally kissed the shiny metal and had a mega-parade in Kolkata.
IPL 2013: The trophy has come home 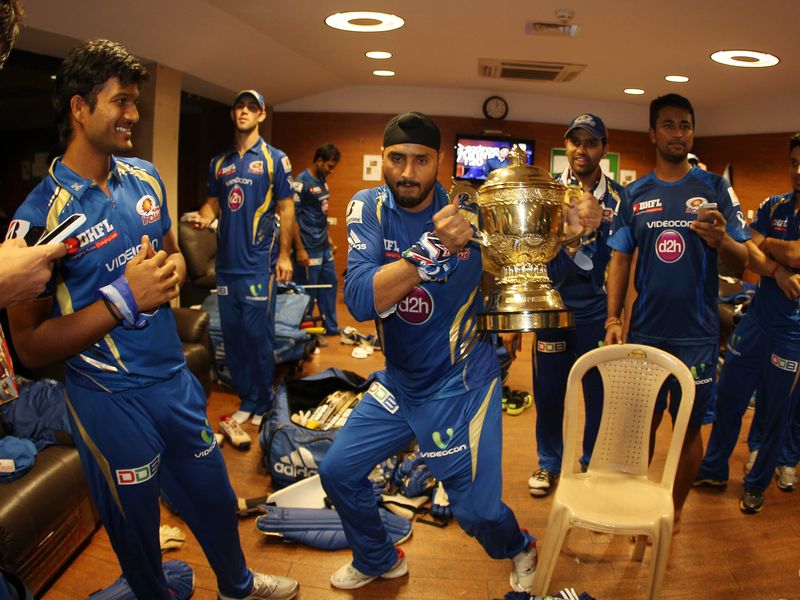 Mumbai is the hub of Indian cricket. The city has produced some of the greatest cricketers in Sachin Tendulkar and Sunil Gavaskar. However, its IPL team Mumbai Indians had struggled to get its hands on the trophy. But in 2013, the tides from the Bay of Bengal turned in their favour and they beat Chennai Super Kings by 23 runs at Eden Gardens to take the trophy home.
IPL 2014: Bangalore bleeds Purple 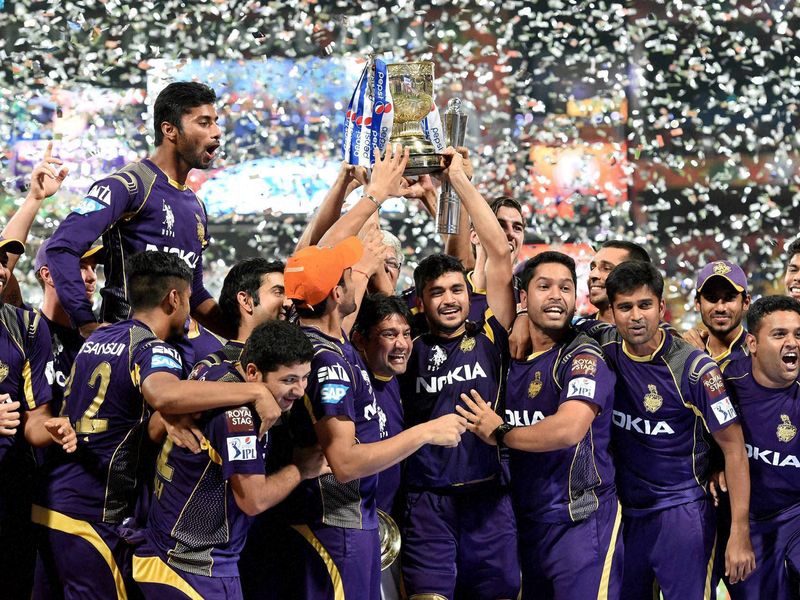 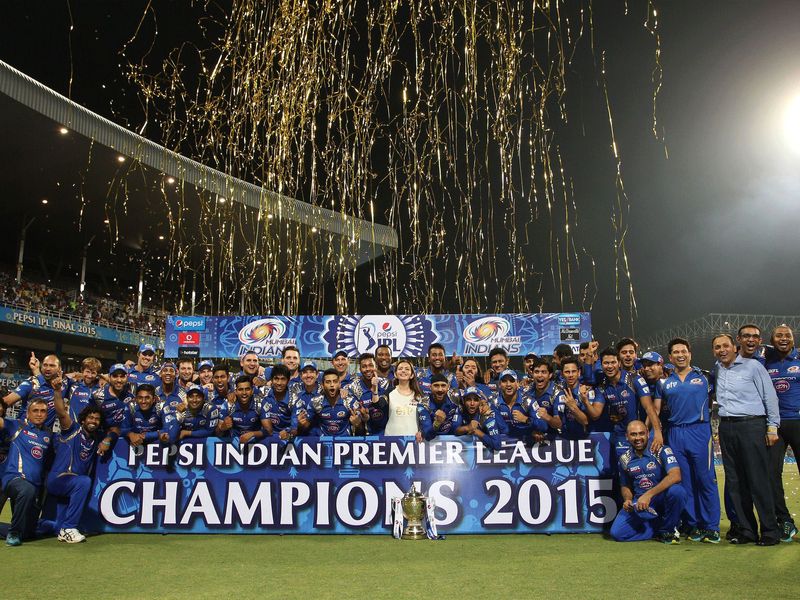 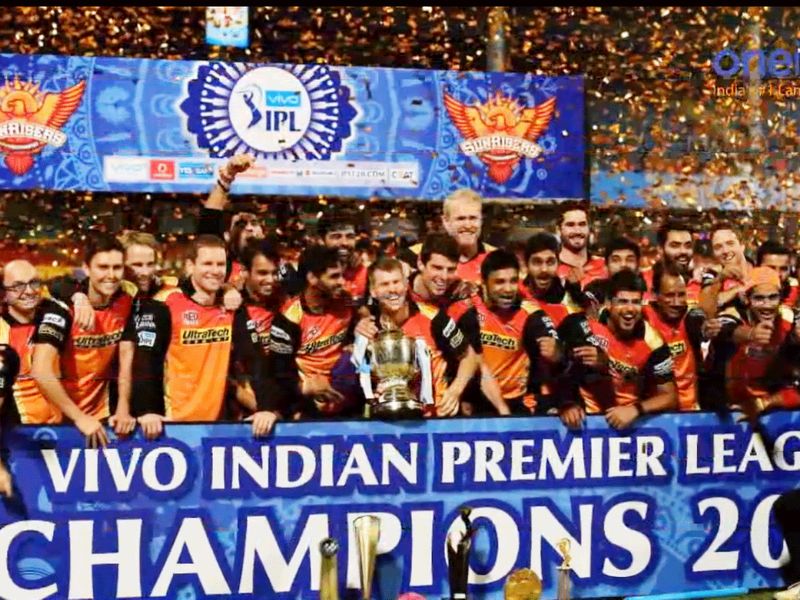 With Deccan Chargers gone, the city of Hyderabad was without a team for long. But then came Sunrisers Hyderabad which became the new face for the city famous for Biryani. The new team with the same old culture could not shake off its winning habit and grabbed the IPL trophy.
IPL 2017: Derby final 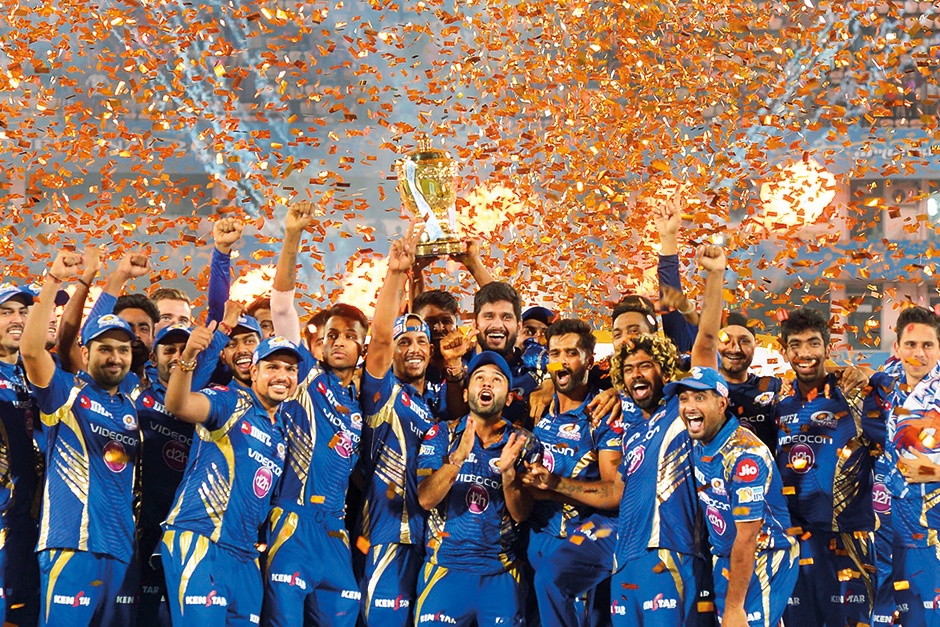 Rohit Sharma once again got the better of his Indian team captain MS Dhoni. Mumbai Indians beat its local rivals Rising Pune Supergiants by one run at Rajiv Gandhi International Cricket Stadium.
IPL 2018: The King of the Jungle is back 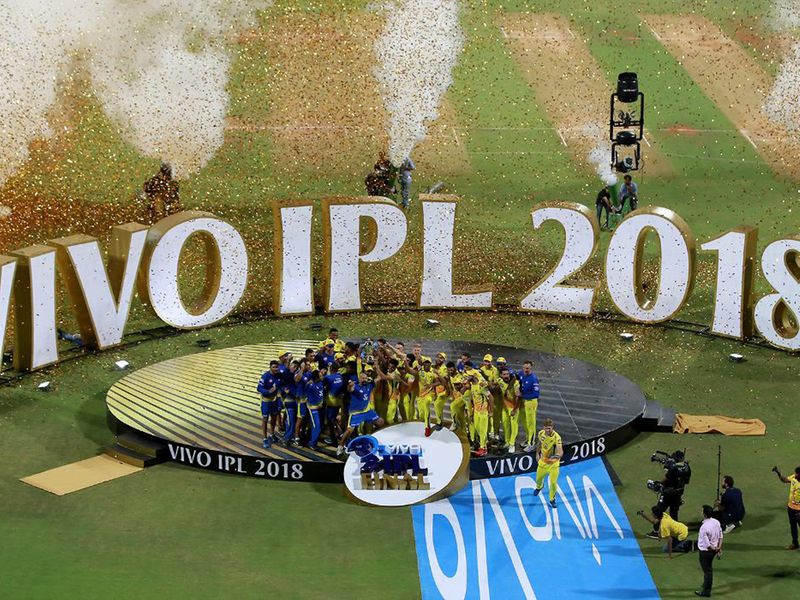 CSK has a lion as their insignia. It perfectly defines their fighting mentality too. The team of many old warhorses were making a comeback to the IPL side after serving a two-year ban due to match-fixing scandal. Although it was away from the league for two long years, the winning mentality stuck with them and it was enough to show why they are the ‘king of the jungle’. They beat Sunrisers Hyderabad by eight wickets at Wankhede Stadium.
IPL 2019: Four and counting 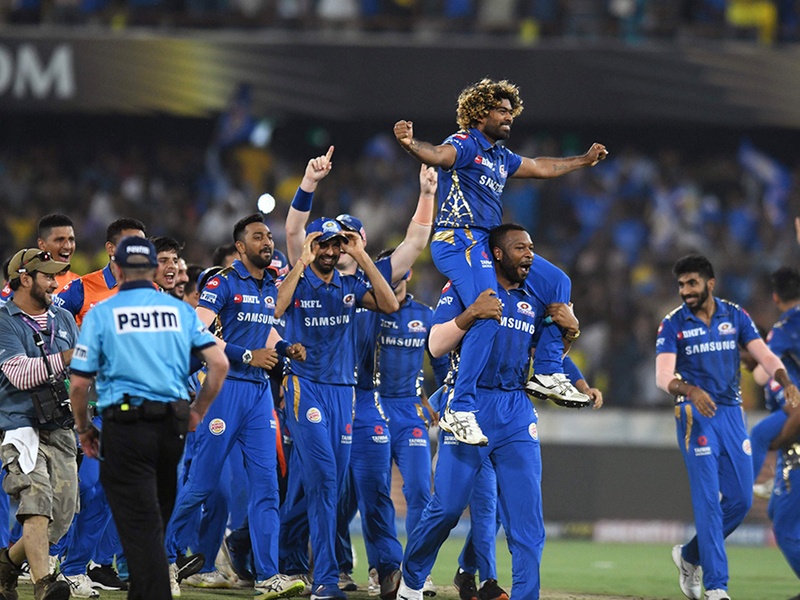