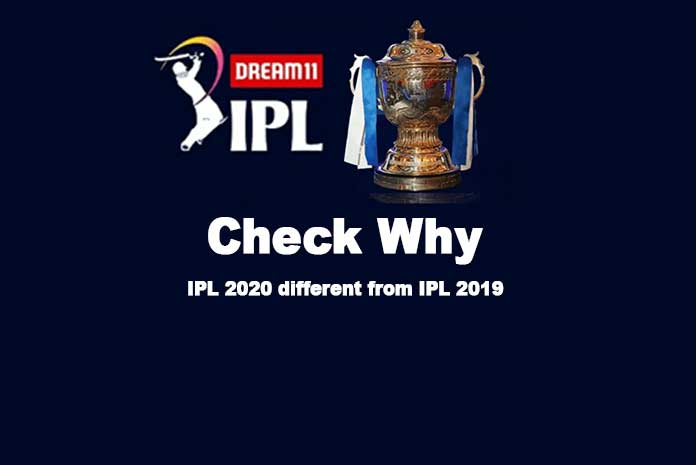 The 13th edition of the Indian Premier League (IPL 2020) is set to get underway from September 19, with the finals being played, However, in the wake of the pandemic, the upcoming season had to be shifted out of Indian and will be held in UAE

The upcoming IPL 2020 will be played in UAE- in Abu Dhabi and Dubai. Separate hotels for franchises, social distancing in dressing rooms, electronic team sheets and recommendations for virtual and outdoor team meetings are part of the directives issued by the BCCI.

All franchises have been asked to appoint a team doctor who will be responsible for ensuring bio-secure guidelines during the tournament. The franchise medical team should obtain a complete medical and travel history (since 1st March 2020) of all players and team support staff at least 2 weeks before the scheduled departure to UAE.

2. Fans will not be present in the stadium for the first time

With the rising cases of Covid-19 and to maintain the norms of social distancing, the IPL 2020 will be played without the presence of fans in the stadium.

Star Sports, the official broadcaster for Indian Premier League 2018 has introduced Star Sports Select: The Dugout, a hyper-personalised curated offering this IPL season for the cricket fan who wants more. The Select Experience, on Star Sports Select, will provide fans with richer analytical experience coupled with a stimulating narrative during and post matches for a fan who would like to stay ahead of the Game.

Defending champions and five-time winner Mumbai Indians will take on last season’s runner-up Chennai Super Kings in the opening match. The afternoon matches will begin at 3:30 pm IST and evening matches will start at 7:30 pm IST. The match timings have been preponed by half an hour this season.

IPL different from some of the other bio-bubbles is how spread out it is. England’s cricket bio-bubble, that hosted tours of West Indies, Pakistan and now Australia involves just two venues, and all players, staff and officials living on site. The Caribbean Premier League had all the players and staff put up at one hotel. The NBA too had 22 teams huddled together at one location. The IPL has eight teams camping in different hotels in Dubai and Abu Dhabi and traveling every day for practice.

In a detailed Standard Operating (SOPs) sent to the IPL franchises, exclusively available with India Today, the BCCI has listed safety protocols that need to be followed by the franchises from before boarding their chartered planes to the UAE till the final ball is bowled in the tournament.

Regular testing to prevent the reduce the risk of asymptomatic spread of the novel coronavirus is going to be a permanent feature throughout IPL 2020, scheduled to be held in the UAE from September 19 to November 10, subject to clearance from the Indian government.

6. Date change from the usual window (March to Sep)

Taking note of the prevailing COVID-19 situation in India, the IPL GC decided to stage the tournament in the United Arab Emirates (UAE) and the matches will be played in Dubai, Sharjah and Abu Dhabi subject to necessary clearances from the Government of India.

IPL 2020 will be played from 19th September and the final will be played on 10th November 2020. The 53-day tournament will witness 10-afternoon matches starting at 15:30 IST while the evening matches will start at 19:30 IST.

The IPL Governing Council has announced the schedule for Dream11 Indian Premier League 2020 to be held in UAE. The season will kickstart on 19th September in Abu Dhabi with a blockbuster clash between defending champions Mumbai Indians and Chennai Super Kings.

The Indian Premier League Governing Council (IPL GC) announced India’s largest learning platform Unacademy as Official Partner for IPL beginning with the 2020 edition which will be held in the UAE from September 19th onwards. The partnership will cover three seasons of IPL.

The Bengaluru-based edutech firm, Unacademy, aims to build an online knowledge repository for multilingual education by bringing expert Educators together from across the globe

In a recent ruling passed by the International Cricket Council (ICC) in the wake of Covid-19 pandemic, the apex body confirmed interim changes to its playing regulations, which include the ban on the use of saliva to shine the ball and allowing home umpires in international series. It also decided to allow teams to have a replacement for players showing Covid-19 symptoms in Test matches. All these changes were recommended by the global body’s cricket committee led by former India captain Anil Kumbl