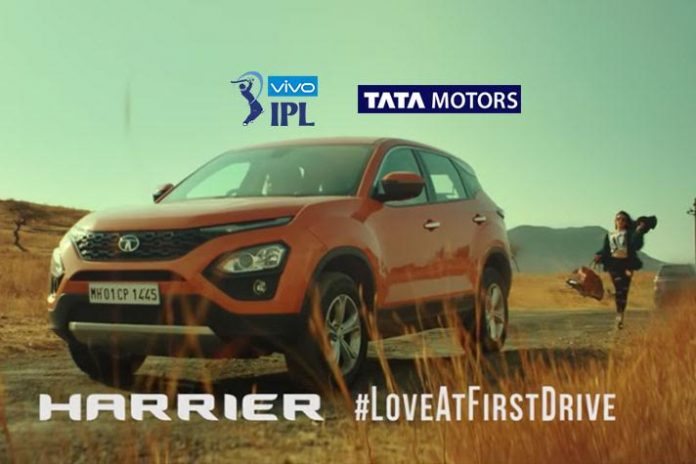 Official vehicle partner for the Indian Premier League (IPL) 2019, Tata Motors have announced a TV campaign for its new beast Harrier. The campaign comprises a series of TVCs, that hinges on the story of “Love At First Drive”.

After an extremely successful partnership last season, Tata Motors will showcase its newly-launched, flagship SUV –Harrier, at the vaunted tournament this year.

Depicting the superlative quality of the Harrier, the Mini-Series will feature the highly acclaimed and celebrated Bollywood talents, Siddhant Chaturvedi from Gully Boy and Fatima Sana Shaikh of Dangal fame.

Scheduled for a nationwide release today, coinciding with the March 23 start of the IPL 2019, this campaign is set to add a further dash of glamour to the Harrier and tell the story of how the SUV with its stunning and bold design, impressive road presence and performance creates an impression which is beyond “love at first sight”. Highlighting the Company’s association with the league for the second consecutive year, these TVCs will be played throughout the 50 days of the IPL season, well supported on ground and digital platforms.

Tapping on the pan India following of the game, this campaign will be advertised across the Star Sports network of 21 channels (National & Regional) to ensure the brand resonates with the audiences across the country. Conceived by 82.5 Communications, the films for the TVCs have been produced by Storytellers.

Commenting on the campaign, Mr. Vivek Srivatsa, Head – Marketing, Passenger Vehicles Business Unit, Tata Motors, said, “The first year of our association with the IPL proved to be a game changer for our much celebrated, compact SUV, the Tata Nexon which won many hearts and is now one of the leading players in its segment. We are confident that the 12th season of the IPL will be much bigger in terms of viewership and spectators at the stadiums. Through the ‘Love at First Drive’ campaign for the Harrier, we want to capture the audience’s attention in a manner that is both clutter breaking and eye-catching. Furthermore, Siddhant and Fatima embody the spirit of the Harrier and lend their individual style and appeal to the campaign. We are confident that the TVCs will project the right imagery for the Harrier and will help the brand to capture the imagination of a billion plus audience, just like the IPL itself.”

Speaking on this campaign, Mr. Anuraag Khandelwal, ECD, 82.5 Communications from Ogilvy Group, Mumbai said, “The Harrier is one outstanding SUV. We wanted to do something disruptive. Not only in the category but across categories. So, we came from a simple observation, that when one saw the Harrier, one fell in love with it. More so after test-driving it! Hence the idea #LoveAtFirstDrive.”

Launched in January this year, the Harrier based on the OMEGARC architecture derived from Land Rover’s legendary D8 platform offers a perfect combination of design and excellence. It is a flagship product from Tata Motors’ passenger vehicle range, boasting of extraordinary exterior design, thoughtfully and intelligently designed plush interiors, future ready connectivity and best-in-class infotainment.

IPL 2019 CSK vs RCB: When and where to watch Live action