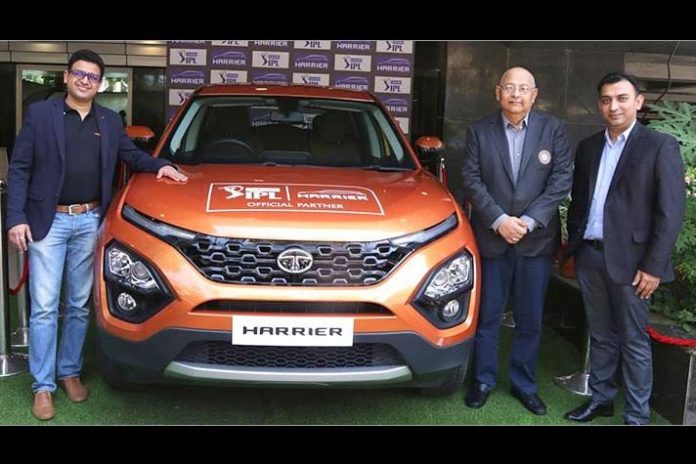 The recently-launched Harrier will leverage the IPL platform to showcase the SUV, engage fans and deliver memorable experiences to them.

“We are excited to continue our partnership with TATA Motors and have their newly-launched SUV, Harrier, as the Official Partner of the IPL, 2019. Harrier’s exhilarating performance is very akin to the muscle that players put in to have the highest batting strike rate and win the Harrier Super Striker Award every match and for the season. We look forward to delivering great exposure to both the Harrier brand as well as TATA Motors,” BCCI’s acting honorary secretary Amitabh Choudhary said at the official announcement of the partnership.

“After a successful association last year, it is only fitting for Tata Motors that our premium SUV, Harrier, should be the Official Partner of one of the biggest sporting events across the World. Born of legendary pedigree, the Harrier has received a phenomenal response from customers across India. Much like the IPL, which is one of the most iconic global cricketing events, and is widely celebrated as a platform for budding talent and international cricket legends, the Harrier too is known for its exhilarating performance and exciting drive. We have elaborate plans to capture the audience’s attention in-stadia, on-air and across digital platforms, and hope to drive tremendous value from this association yet again,” says Mayank Pareek, President Passenger Vehicle Business Unit, Tata Motors.

Harrier thus becomes the Official Partner for VIVO IPL 2019. Tata had introduced Nexon during the IPL 2018.

According to Tata Motors, total enquiries for Nexon had more than doubled during IPL period (April-May), touching 1720 per day against 817 before the start of the tournament.

The brand will also launch its nationwide 360° Harrier marketing campaign, coinciding with the launch of the IPL Season 12 on March 23.

In addition, driven by the sale of Nexon and Hexa, the company saw its domestic sales grow by 61 per cent y-o-y to 17,489 units in May. Not just that, Tata Motors saw an increase of 18 per cent in enquiries and bookings in May, which is generally considered a weak month in the industry for car sales. The rewarding association with IPL in fact catapulted Tata Nexon into the second spot in the category within a year of its launch in 2018, according to exchange for media.

Tata Motors is hoping that the magic that IPL worked on Nexon also rubs off on Tata Harrier. As the Official Partner, Tata Motors will showcase Harrier in the stadium during all matches, along with exciting on-ground engagement plans and merchandise. The two engagement activities that the company launched last year – Super Striker and Fan Catch – will continue this year as well. Srivatsa said that having seen the response to these initiatives last year, the company will double down its efforts on these activities this year.