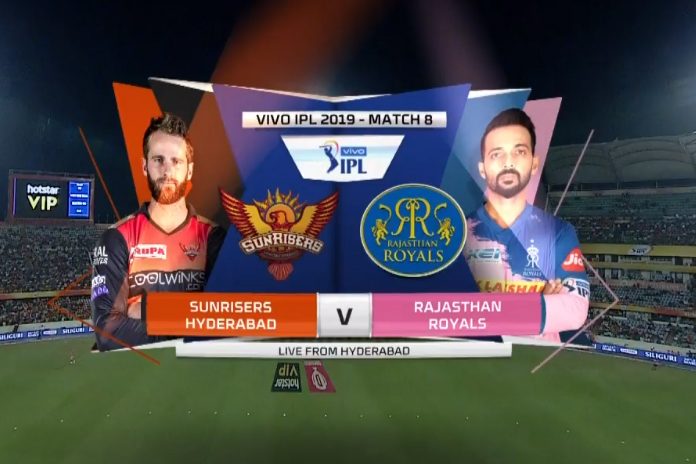 Samson’s first century of the ongoing IPL went in vain, as chasing a mammoth 199-run target, Warner set up the platform for Sunrisers with a breezy 69 off 37 balls and together with Jonny Bairstow (45 off 28) added a century stand for the opening wicket to spoil Rajasthan’s day.

Sunrisers needed the quick start if they fancy their chances of eclipsing Rajasthan’s imposing 198 for two and Warner and Bairstow just provided that to give the impetus for the rest of the batsmen to follow as the hosts chased down the target in 19 overs.

Earlier, Samson smashed the first century of the ongoing IPL and together with skipper Ajinkya Rahane stitched a century stand to guide Rajasthan to a mammoth total.

Samson didn’t spare a single Sunrisers’ bowler and remained unbeaten on 102 that came off just 55 balls with the help of 10 fours and four sixes. It was Samson’s second IPL ton. His first century came in 2017.

Chasing the total, Warner looked in imperious form as he started clobbering the Rajasthan bowlers from the word go.

Sensing the demand of the situation, Warner, who hit 85 against Kolkata Knight Riders in a losing cause in their opener, went hammer and tongs from the beginning and struck fours and sixes at will to propel Sunrisers to 54 for no loss after five overs.

Together with Bairstow, Warner shared 110 runs in just 58 balls for the opening stand.

But just when it seemed Warner would run away with the game, Ben Stokes foxed him with a perfect short ball as he was holed out by Dhawal Kulkarni at deep fine leg.

Warner’s knock was studded with nine fours and two sixes.

It would have been double blow for Sunrisers but Kulkarni dropped Bairstow at thirdman a ball later.

But Kulkarni made up for his mistake in the final ball of the next over, latching on to a fine catch at the long-off to sent Bairstow packing.

Skipper Kane Williamson (14) and Vijay Shankar (35 off 15) played aggressively to bring down the equation within reach but three quick wickets, that too in consecutive balls of Shreyas Gopal (3/27) in the 16th over, changed the complexion of the game.

But Yusuf Pathan (16 not out) and Rashid Khan (15 not out) played sensibly to overwhelm the target with ease.

Earlier, Rahane led from the front with 49-ball 70 and together with Samson shared 119 runs for the second wicket to set the base for the total.

Introduced into the attack in the fourth over, Rashid (1/24) struck with only his second ball, cleaning up Jos Buttler around his legs.

Rajasthan’s decision to bat first didn’t go according to plan, at least, in the powerplay as the visitors struggled against Sunrisers’ disciplined bowling to garner just 35 runs.

After Buttler’s dismissal, skipper Rahane was joined at the crease by Samson and the duo played cautiously without taking any undue risk to take Rajasthan forward.

While Rahane played the anchor’s role, Samson opened up his arms soon and smashed two sixes in consecutive overs of Shabaz Nadeem and Siddharth Kaul to give some momentum to Rajasthan’s innings.

Rahane soon joined his junior colleague and clobbered Nadeem straight over his head as Rajasthan reached 75 for one at the halfway stage.

After a slow start, Rahane stepped on the accelerator and welcomed Vijay Shankar with six over deep square leg boundary.

Both Rahane and Samson paced their innings to perfection, as after playing cautiously initially, they broke their shackles when needed and notched up the team’s 100 in 11.5 overs.

Rahane registered his first fifty of the ongoing IPL in 38 balls while Samson brought up his half-century in 34 deliveries as the duo raised 100-run stand for the second wicket in 65 balls.

Rahane finally departed in the 16th over bowled by Nadeem, holed out by Manish Pandey at long-on as he went for a big shot. He struck four boundaries and three sixes.

Bhuvneshwar Kumar’s torrid time at the death overs continued. If it was Andre Russell in the last match, it was Samson Friday as the young Kerala batsman too the senior pacer to cleaners, hitting him for four boundaries and one six to pick up 24 runs in the 18th over.

As if that was not enough, Bhuvneshwar witnessed yet another forgettable day as he leaked 21 runs in the last over.