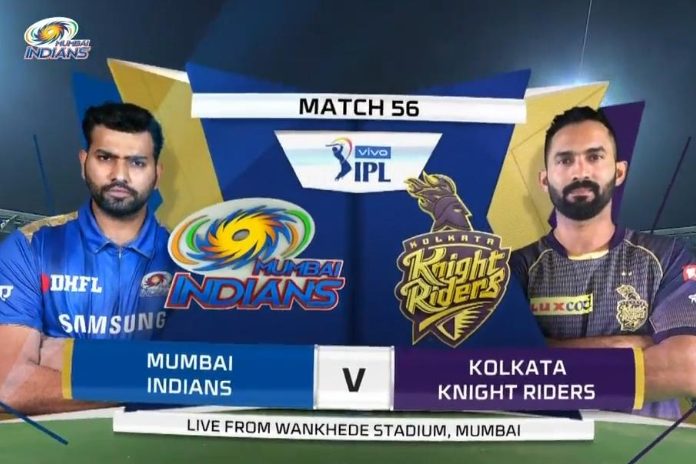 Rohit Sharma struck an unbeaten 55 to lead Mumbai Indians to an easy 9-wicket win over Kolkata Knight Riders, which gave them the pole position in the IPL table and also ensured a lucky fourth place finish for Sunrisers Hyderabad, here Sunday.

Rohit stitched two crucial partnerships, first a 46-run stand with Quinton de Kock (30) for the opening wicket and then another 88 runs for the unconquered second wicket with Suryakumar Yadav (46 not) as MI chased down the target of 134 with 3.5 overs to spare.

The MI captain carried his bat through the innings, hitting eight fours off 48 balls while Yadav consumed 27 balls for his unbeaten 46.

MI ended the league phase with 18 points from 14 matches — the same as Chennai Super Kings and Delhi Capitals — but they secured the top spot by virtue of better run rate. MI ended at a net run rate of 0.421 as against 0.131

MI’s win meant that the KKR are knocked out of the tournament with Sunrisers making it to the play-offs at their expense on better net run rate.

KKR and SRH ended the league phase on 12 points each but the Hyderabad-based side sneaked to the play-offs with 0.577 net run rate against 0.028 of the Kolkata side.

MI and Chennai Super Kings play against each other in Chennai in the Qualifier 1 on Tuesday while Delhi Capitals — who finished third — take on SRH in the Eliminator at Visakhapatnam on Wednesday.

The Qualifier 2 — between the losing team of Qualifier 1 and winner of Eliminator — will also be played at Visakhapatnam on Friday.

Chasing 134 for a win, MI made a good start with 46 runs coming form powerplay without losing any wicket. South African Quinton de Kock hitting two consecutive sixes and a four off Andre Russell in the fourth over was the highlight.

De Kock (30) was out the first ball after powerplay with wicketkeeper Dinesh Karthik taking a brilliant running catch off the bowling of Prasidh Krishna.

That was the only success KKR had as Rohit and Yadav took MI home in 16.1 overs. Yadav hit a towering six to end the match.

Earlier, Andre Russell failed to deliver when it mattered the most as Kolkata Knight Riders scored a sub-par 133 for 7 in their ‘do-or die’ game.

KKR’s top run-scorer of this IPL, Russell (510 from 13 innings) was dismissed for a first ball duck as the visiting side frittered away a good start to post a modest total after being sent into bat.

Openers Chris Lynn (41 off 29 balls) and Shubman Gill (9 off 16 balls) put up 49 runs together in 6.1 overs but KKR suffered a middle-order collapse as Mumbai bowlers made a splendid comeback.

Lynn and Gill started slowly before they started playing their big shots. Lynn hammered veteran Malinga for a four and a six in the fourth over as KKR fetched 13 runs of it.

There was no stopping Lynn as he struck two towering sixes off leg-spinner Rahul Chahar in the sixth over as KKR finished the Powerplay at 49/0.

However, Hardik brought the home side back into the match by removing both the openers in quick succession. While he trapped Gill in front of the wicket in the seventh over, he sent back a dangerous Lynn in the ninth over, caught by Quinton De Kock, as Kolkata slumped to 56/2.

KKR could fetch only 12 runs in five overs and were struggling at 61/2 after 11 overs. McClenaghan bowled a maiden over as Robin Uthappa struggled to score.

And in the 13th over, Malinga gave KKR a double blow by removing skipper Dinesh Karthik (3 off 9 balls) and in-form Russell (0 off 1 ball), who gloved to keeper de Kock.

KKR were 73/4 then and they never recovered from there.