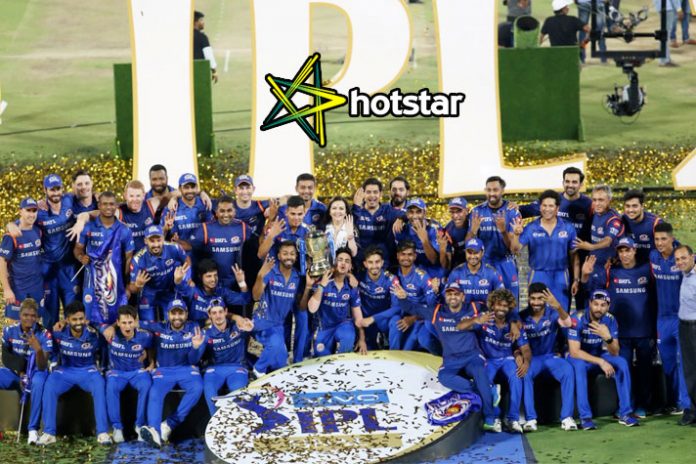 Mumbai creates the Indian Premier League history with the record fourth title as the final with Chennai Super Kings on Sunday was decided off the last ball. As the excitement of the match between Rohit Sharma’s Mumbai Indians and MS Dhoni-led Chennai Super Kings swung over by over, ball by ball another record was made off the field. On the live streaming platform for the IPL 2019. Hotstar yet again has created history for concurrent viewership.

A record 18.6 million concurrent viewers were hooked on to Hotstar in the 19th over during Chennai Super Kings chase. The decider of the biggest commercial league of cricket couldn’t have been more intriguing than the prospect of the game going either way even off the last ball.

The match had witnessed an impressive 8 to 12 million concurrent audience for a major part of action. According to Indiatimes.com, the numbers grew by millions as seasoned pro Shane Watson stood firm at one end to drive Chennai Super Kings closer to the target in chase of their record fourth IPL title.

The team at Hotstar must be celebrating as this is the highest number of concurrent users the super streamer has registered in its history.

“The engineering of Hotstar has been taken in-house and it keeps on setting new records for concurrent viewers for a live event. Clearly, chief product officer Varun Narang is doing something right.”

Also during the IPL 2019, Hotstar had breached the earlier global landmark a concurrency of 12.7 million viewers during the Royal Challengers Bangalore versus Mumbai Indians match on March 28. The OTT platform within the three weeks of the league this year had garner 267 million audience figure.

Prior to that, Hotstar’s best concurrency figure was recorded at 11.2 million concurrent viewers during the India-New Zealand T20 match in February.

Stage now shifts to the ICC World Cup 2019, to be played in England and Wales from May 30. Hotstar and Star Sports will be heavily relying on the games involving the Virat Kohli-led Team India. The tickets for the India matches have invoked the maximum interest as well as the highest price tag. India-Pakistan match on June 16 at Old Trafford, Manchester, tickets are the most expensive ones for the World Cup 2019 with the lowest denomination starting at ₹77,000 per ticket.

The match is also going to be a rage on television and digital media. The match on Hotstar may well  breach the 20 million mark as fan not just in India and Pakistan but across the world will be following the mother of the all ICC World Cup battles.