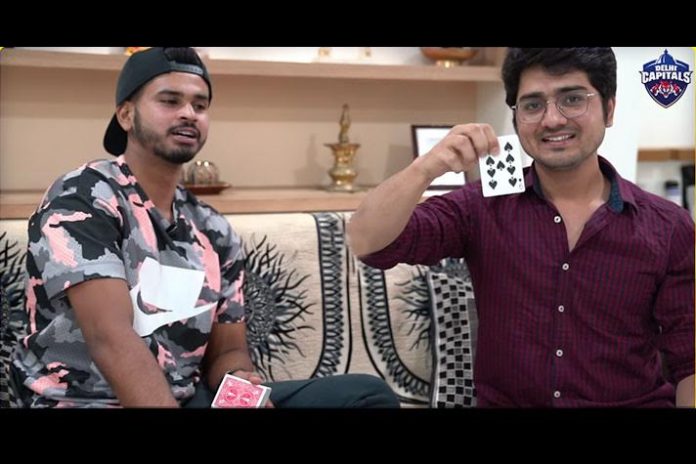 Delhi Capitals, after having played the Indian Premier League for 11 seasons as Delhi Daredevils, will be looking up for some magic to end the title drought in their new avatar. Believe it or not, their designated captain Shreyas Iyer holds many a magic tricks up his sleeves. Literally.

The 24-year-old Mumbaikar might have left a lot to be desired to cement is position in the Indian team, but with a pack of cards in hand the dashing right-handed batsman will leave his fans awe-stuck to believe the magic ticks accomplished with the acumen of a seasoned pro.

Iyer has given his Indian Premier League franchisee enough confidence as a skipper after taking the reign from Gautam Gambhir, who had quit captaincy following a disastrous run with the bat during the IPL 2018.

The Delhi Capitals management, besides finding him to be the most competent to spearhead the team under a new ownership and management, has also drawn a lots of inspiration from Iyer’s magic tricks.

Delhi Capitals have also shared on their website a video of Iyer displaying his magic acumen to a fan. Goes without saying, if cricket were not his first love the attacking top order batsman is all set for an alternate career.

For those who want to probe further, his tricks are not just limited to a pack of cards. The video below will reveal something more tricky. Just like a high class batsman’s anticipation about what the bowler is going to do next, Iyer here predicts another person’s move and pens it down even before the trick has started.

Iyer might not be taking his passion for magic as seriously as his cricket. However, he still has some plans to pursue his second skill after cricket. Iyer The Magician has his own youtube channel ‘Shreyas Iyer – Not a cricketer, but a magician’.

IPL: Bachchans in talks to acquire stake in Rajasthan Royals