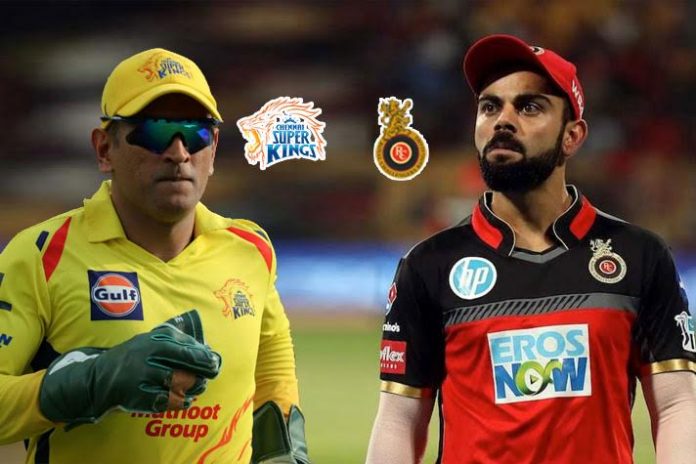 The action in the Indian Premier League (IPL) 2019 starts as seasoned pros Chennai Super Kings host energetic Royal Challengers Bangalore at the MA Chidambaram stadium in Chennai. Saturday, March 23, 6:30 p.m. is the date and timeline for all the action to start.

A performance by Army bands will precede the real LIVE action as a symbolic opening ceremony. The Board of Control for Cricket in India had scrapped the entertainer opening show as a token of respect to the Pulwama martyrs and pledged the opening budget meant for the event for the benevolence of the martyred Jawans families.

For Virat Kohli, it couldn’t be a bigger statement if his young side start off with a bang at Mahendra Singh Dhoni’s ‘spiritual home’, a task which will be easier said than done.

Then they have two spinners with truckloads of experience in 39-year-old Imran Tahir and 38-year-old Harbhajan Singh, who have ability to change the complexion of a game with one-off over.

Even the two out-of-favour India players, leg-spinner Karn Sharma (31) and seamer Mohit Sharma (30) are have left their twenties, the proverbial peak period for athletes, behind.

However, when it comes to match awareness, the CSK players are second to none. The most consistent team of the Indian Premier League, who have always been in the top four, are a formidable side at home on a slow turner with some vocal crowd complementing the quality.

While CSK are a three-time champions, the Bengaluru franchise is probably the biggest underachiever despite boasting of some of the best names in its squad.

The outcome of Saturday’s game will depend on which team bowls better and holds its nerve as both sides have players who can turn a match on its head in a jiffy.

CSK‘s Ambati Rayudu and Ravindra Jadeja will be keen to step up their performances and seal a spot in the Indian squad for the 2019 ICC World Cup, starting in England and Wales from May 30. While RCB paceman Umesh Yadav will also look to shine in the performance in the T20 extravaganza makes a case for selection in the England-bound squad.

A lot has been said about the workload, especially that of the bowlers, which needs to be monitored. CSK head coach Stephen Fleming said on Wednesday that it was up to the players and as professionals, they would be aware of the requirements.

CSK enjoy an impressive record against RCB, having won 15 matches and lost seven with one no-result. The hosts haven’t lost to its rival since 2014.

While the home team has a well-balanced squad with most of the bases covered, RCB is facing concerns over the availability of some foreign players at certain stages of the tournament.

Leg-spinner Yuzvendra Chahal will again be the key man for RCB as he has been over the past seasons and will need the rest of the bowling attack to step up.

Kohli has always led from the front and his exploits in the IPL are well documented, the RCB skipper will begin yet another campaign aware that his form could prove vital in the success of his side in the gruelling tournament.

Malayalam: Asianet Plus SD o for the Opening, Closing ceremonies and live matches on all Sundays.

The match will also be streamed live on Star’s OTT platform Hotstar.

The match at the MA Chidambaram Stadium Ground in Chennai will start at 8 pm, but build-up on Star Sports starts an hour and a half earlier.