Indian Premier League is like the ‘Super Bowl’ for brands and sponsors in the county. In the nation obsessed with cricket, the IPL gets more commercial and brand value across all mediums of communication and broadcast than the Indian national cricket team.

The IPL Season 12 schedule is yet to be confirmed. Still, more than 20 brands have inked sponsorship deals across different platforms for the IPL 2019.

The rush for sponsorship slots across all the mediums for the  IPL will begin once the itinerary is finalised. The league, however, is slated to start from March 23. The venues and match dates will be confirmed only after the Lok Sabha election schedule is out.

While IPL offers the best ROIs to the sponsors who invest their marketing budgets in sports, Chennai Super Kings is the team that can be the best option among the teams, accrodign to POWA index data.

For the female products Kings XI Punjab will give better returns than the Chennai Super Kings or any of the other four teams – Kolkata Knight Riders, Mumbai Indians, Royal Challengers Bangalore and Rajasthan Royals – which respectively get a place higher than the Punjab franchisee. 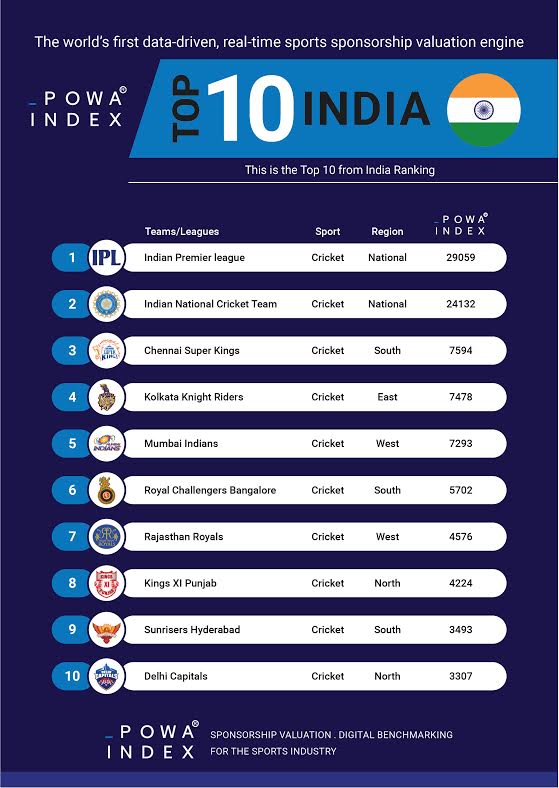 Kings XI Punjab is “the platform” for female centric brands. The latest Powa index gender split will make the Preity Zinta co-owned IPL team an even better choice for the brand categories which look to influence female consumer base.

The Gender Split Powa index shows that KXIP has the best 9.61 ratings for the female audience, which is even higher than the 8.80 overall corresponding number for the IPL. For the female brands Chennai Super Kings (6.79) and Delhi Capitals (6.51) come next, while SunRisers Hyderabad (4.98) sit on the lowest pedestal.

The Punjab-based IPL franchisee has also been the choice of washing powder brand Fena and cosmetics rage Lotus Herbal, which strategically target female eyeballs, during the IPL Season 11.