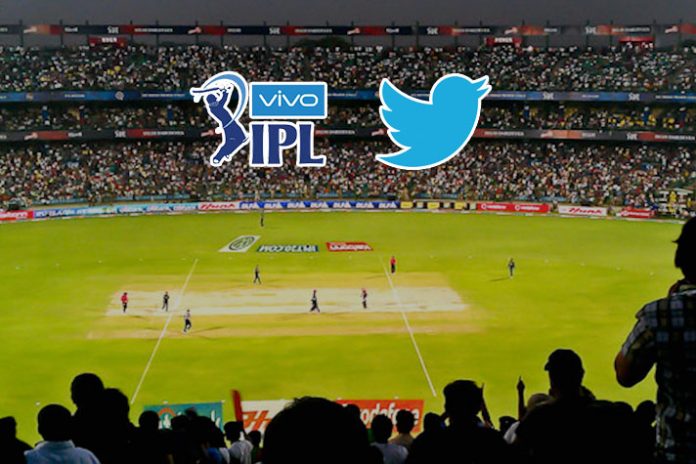 The Indian Premier League (IPL) 2019 first three days have witnessed cricket scoring at the T20 pace on Twitter. The IPL 2019 season-opening has accounted for almost 1.4 million Tweets as fans thronged the social media platform for cricket conversation across the world.

The conversation heats up on Twitter as the Summer of Indian Cricket has started with the intense IPL action. Since the start of March, there have been over 4.8 million Tweets on cricket from teams, players and fans alike. The opening weekend of the IPL, which started with the Chennai Super Kings and Royal Challengers Bangalore match on Saturday, March 23, has recorded close to 1.4 million Tweets. The league and the Summer of Cricket might be Indian, but the conversation is global.

The richest and the biggest cricket league, IPL invokes global interest as cricket icons from across the world descend to perform for their respective franchisees.

Mumbai Indias at their official Twitter handle @mipaltan have the highest number of 5.1 million followers who are active with hashtages #MI, #cricketmerijan, #onefamily and #mumbaiIndias. Rajasthan Royals @rajasthanroyals have the least number of 1.12 million Twitter followers, whereas Delhi Capitals, Delhi Daredevils in the first year of their reincarnation, are ahead of Rajasthan Royals with their new identity and Twitter handle @DelhiCapitals.

IPL 2019 sponsorships: from multi-crore MNCs, start-ups to a ‘brass band’

This year, fans can look forward to highlighting clips and live coverage from Cricbuzz (@Cricbuzz) of their pre-show, mid-innings, and post-show coverage featuring top names in the sport like Harsha Bhogle, Gaurav Kapur, and Virender Sehwag. Twitter has also partnered with NDTV (@NDTV) to offer fans live pre- and post-match video commentary as well as customized graphic explainers and scorecards to get them the latest happenings during the cricket season. 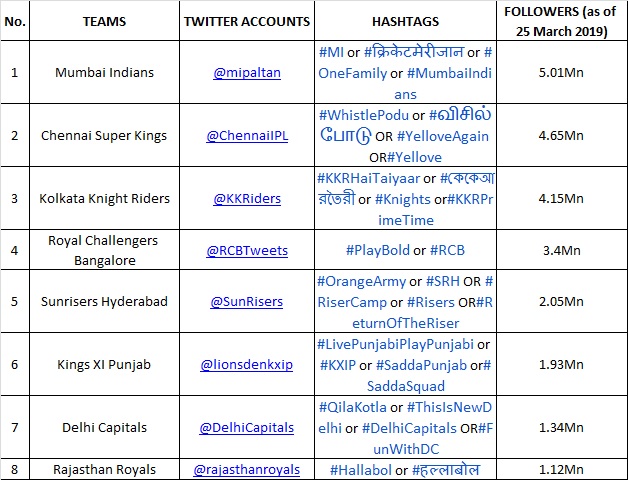 “Twitter is the best place to see what’s happening in the world of sports, especially this summer of cricket. We are pleased to have Cricbuzz and NDTV to bring cricket fans on Twitter exclusive live content on their favourite game,” says Rahul Pushkarna, Head of Content Partnerships, Twitter Asia Pacific.

“Cricket is consistently one of the world’s largest conversation drivers on Twitter and we expect to see more engagement from fans and brands alike as the season heats up,” he added. “Back by popular demand we have emojis for all your favorite cricket teams like Kolkata Knight Riders, Mumbai Indians, Chennai Super Kings and so many more.”