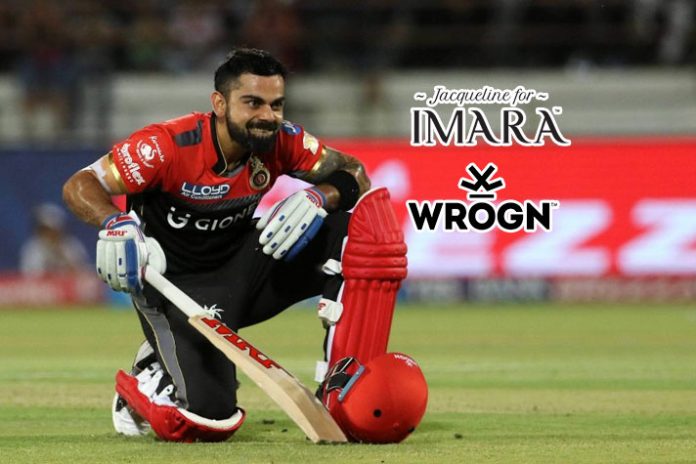 Two most prominent places on the Royal Challengers Bangalore jersey during the Indian Premier League Season 12 will belong to Anjana Reddy co-owned brands.

Virat Kohli’s association with Royal Challengers Bangalore will go beyond playing and leading the side in the Indian Premier League 2019. In a similar manner, Jacqueline Fernandez will extend her ties with the RCB from being a mere celebrity face of the IPL franchisee.

Wrogn, co-owned by Virat Kohli and Anjana Reddy, will be Royal Challenger Bangalore’s title sponsor for the IPL 2019 season.

Another Anjana Reddy brand Imara, co-owned by Hindi cinema celebrity Jacqueline Fernandez, has inked the deal for the “back jersey” rights of the team. Both the brands had been associated with the team last year, too. But their position on RCB marketing collaterals was never so prominent.

The Wrogn as part of the deal will replace OTT entertainment and cinema platform Eros Now as the title sponsor of the RCB. The one-year title sponsorship deal, according to sources privy to negotiations, is closed for ₹ 16 crore.

Virat Kohli is one major unique selling factor for the RCB sponsorships. The lead sponsors get right to shoot commercial campaigns with the RCB skipper and at least two of his team members, besides a meet and greet opportunity for brand activation.

Virat Kohli has been the most prominent face of the team and the biggest brand icon of the country.

RCB will start their IPL 2019 campaign on March 23 in Chennai against the Mahendra Singh Dhoni-led Chennai Super Kings.

IPL 2019: Smith, Warner may be available for first round matches