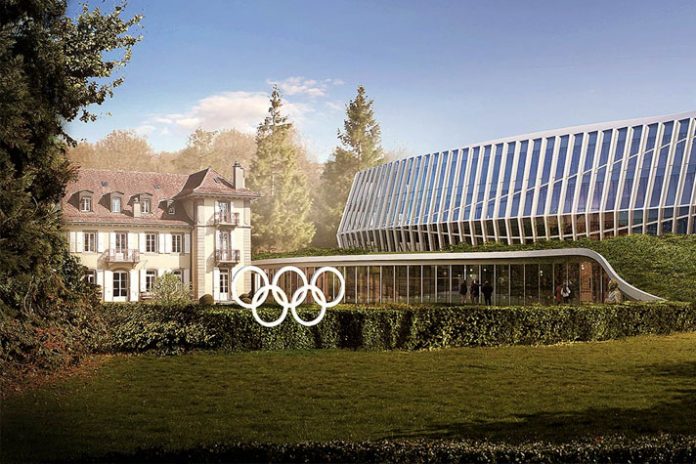 The historic moment coincides with another historic date for the Olympic movement – the 125th anniversary of the creation of the IOC.

With this new building, the IOC confirms its attachment to Lausanne, the Olympic Capital. Developed in close consultation with the local authorities, Olympic House will offer the region an emblematic architectural landmark and become an important element of the local Louis Bourget public park, which welcomes a diverse group of visitors every year.

The Olympic House project was in principle had started in 2014 when the IOC had decided to move ahead with the consolidation of its head office.

The privately-funded Olympic has a three-fold sustainability:

> It has the strong ambition to meet the most demanding sustainability standards both locally and internationally. It has been designed as a sustainable building in terms of both construction and operations, with special efforts put into energy and water efficiency, waste reduction and landscape integration.

>It aims to regroup all IOC staff in one location, resulting in cost savings and increased collaboration.

> It also represents an investment by the IOC in the local economy and development. Eighty per cent of the construction of the building has been completed by local companies and contributed to the development of local competencies.

ALL IOC STAFF UNDER ONE ROOF

Designed by Danish architecture firm 3XN, Olympic House will allow the IOC to bring together its staff – 500 employees currently spread across Lausanne in four locations – under one roof at a single site. Selected by the IOC in April 2014 after an international architecture competition, 3XN partnered with Swiss architects IttenBrechbühl to oversee the construction of the project.

From 23 June onwards, the IOC will benefit from two Olympic centres in Lausanne: Olympic House in Vidy to cater for its administration and offer a welcoming meeting place for all its stakeholders; and The Olympic Museum in Ouchy to host the general public, IOC has stated in a Press release.

Olympic House is a unique example of innovative collaboration between many different stakeholders, including the IOC, the Worldwide Olympic Partners (Dow, Toyota and Panasonic), 3XN and IttenBrechbühl, sustainability certification bodies, local authorities, suppliers and academics.

The Olympic House to be opened on June 23 has started as a dream project timeline in December 2012 with the presentation of the feasibility study for the consolidation of the IOC headquarters to the Executive Board. This is how the project progressed thereafter:

June 2013: Selection, by the architecture competition jury, of the 12 architects invited to develop a project for the new IOC headquarters.

July 2013: Briefing of selected architects on site in Lausanne, including the handover of the architecture competition programme developed with the IOC staff.

December 2013: Choice of the architecture competition winners by the competition jury and the IOC Executive Board.

January 2014: Launch of the Parallel Development Studies with the three architecture competition winners.

April 2014: Choice of the preferred architecture partner for the consolidation of the IOC headquarters by the Executive Board.

June 2014: Creation of the architecture consortium between 3XN and IttenBrechbühl.

December 2014: Presentation of the Olympic House project to the 127th IOC Session.

8 December 2015: Symbolic laying of the first stone of the new IOC headquarters.

February 2016: Launch of archaeological studies at the Vidy site and start of deconstruction.