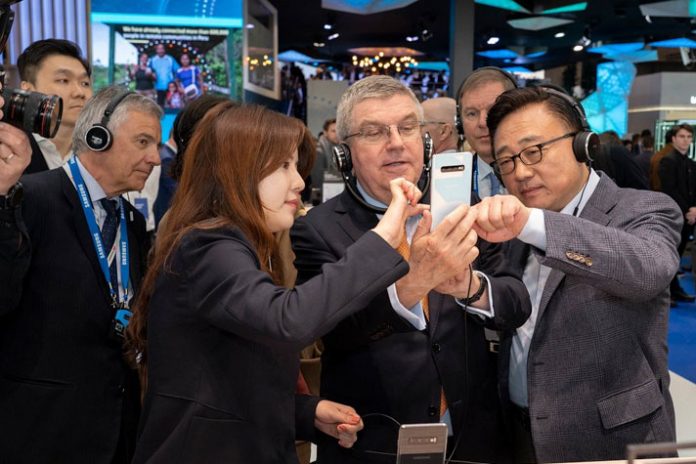 IOC President Thomas Bach, addressing an audience of 2,000 industry leaders and experts at the annual world mobile in Barcelona, has  outlined his vision of how digital technology will transform the way that people experience the Olympic Games.

Bach highlighted several ways in which the IOC is already shaping the digital future of the Olympic Games, thanks to the technology of many of the IOC’s Worldwide TOP Partners, such as Alibaba, Intel, OMEGA and Samsung. He emphasised the rise of 5G technology as holding great opportunity for the Olympic Games of the future.

“This digital future also offers us the opportunity to dramatically change the way that people experience the Olympic Games. This is why we are very excited about the advent of 5G technology, because it will open up so many new and better ways to spread the joy, the emotions and the values of sport to even more people.”

He also highlighted that the Olympic Winter Games PyeongChang 2018 marked the first time ever that 5G technology had been used at a global event.

With the support of Worldwide TOP Partners Intel and Samsung, the Olympic Winter Games PyeongChang 2018 provided the world’s biggest showcase of 5G technologies and the first broadscale 5G network to date – providing a sneak preview of how 5G could change the Olympic Games.

Whilst at the Congress, President Bach visited Worldwide TOP Partners Intel’s and Samsung’s showcasing. With Intel’s CEO Bob Swan and Sandra Rivera, SVP and GM of the Network Platforms Group, he had the chance to experience Intel’s 5G technology and discuss plans for the upcoming Olympic Games Tokyo 2020.

The IOC recently extended its longstanding partnership with Samsung through to 2028, and at the Samsung showcase, DongJin Koh, President, Samsung Electronics, Mobile Communication Business, and Younghee Lee, Chief Marketing Officer of Samsung Electronics, demonstrated to the IOC President first hand some of the company’s latest mobile technology innovations.

On Monday, President Bach participated in a private roundtable discussion led by HM King Felipe VI of Spain on the topic of intelligent connectivity, in which the President emphasised the opportunities that 5G and other technologies offer the sports movement.