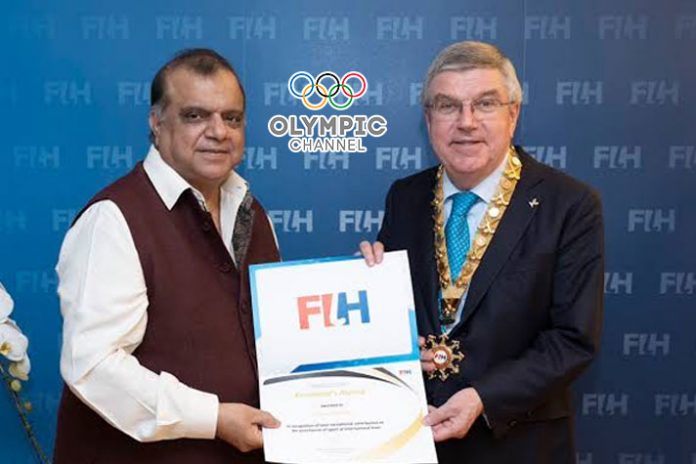 In a letter to IOC president Thomas Bach, Batra while expressing his gratitude has termed the launch of the Olympic Channel Hindi platform as a “wonderful initiative”.

“Hindi-speaking (sports) fans in India and all around the world will now be able to truly experience and engage with the Olympic Channel and its locally-curated content in a more personalised way, gaining closer access to their favourite sporting icons. This significant initiative will give a strong impetus to the development of the Olympic movement in India,” Dr Batra has told Bach.

The Olympic Channel Hindi platform was formally launched on Sunday. The fans can access the digital content on www.olympicchannel.com and its mobile apps.

Featuring Olympic stars and stories from across the globe and continuing the excitement of the Olympic Games all year round, the International Olympic Committee’s Olympic Channel is now available to Hindi-speaking fans around the world in their native language.

In addition to the multi-language user interface, fans and users have the option to experience the Olympic Channel in Hindi while also engaging with locally produced daily content, news and features as well as Olympic-themed original series and documentaries with an emphasis on Indian athletes, teams and sports.

“The availability of the Hindi language on the global digital platform is a significant step in the Olympic Channel’s evolution as we look to create more personalised experiences for Olympic fans around the world,” said Mark Parkman, general manager of the IOC’s global Olympic Channel. “This is a great way to engage with more fans in growing markets and to tell the great Olympic stories in a way that connects directly to them as we build excitement on the road to Tokyo 2020.”

To experience the Olympic Channel in a language other than English, users can select the option through the language button in the upper right-hand corner of olympicchannel.com. On the Olympic Channel app, the experience will coincide with the language of the mobile device operating system. To select a different language, users should change their operating system language preference on their mobile device.

Offering unparalleled access to Olympic sports and athletes all year round, the subscription-free Olympic Channel OTT service launched worldwide following the Olympic Games Rio 2016. Through inspirational stories, comprehensive coverage, original programming, live events and exclusive interviews, the Olympic Channel provides fans with a dedicated media platform to follow their favourite sports and athletes before, during and after the Olympic Games on the road to Tokyo 2020 and beyond.

The Olympic Channel is available worldwide at olympicchannel.com and its apps for mobile and connected TV devices.