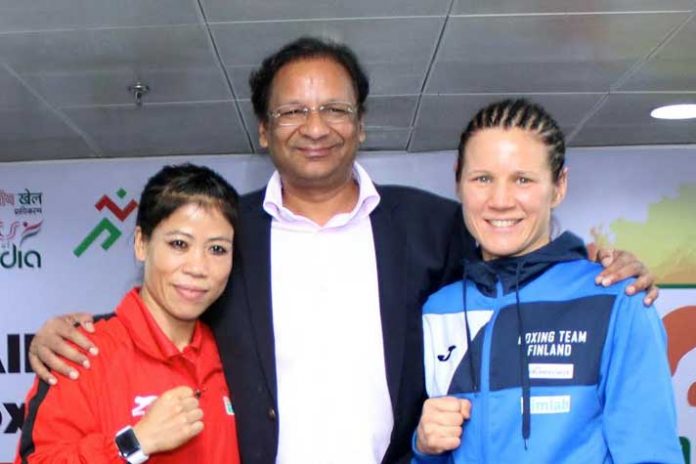 The AIBA Women’s World Boxing Championships 2018, beginning at the IG Stadium here from Wednesday, promises action-packed contests in 10 weight categories as over 300 boxers from 73 countries will compete in them, making it the biggest single-disciple event after the FIFA Youth World Cup held last year in the national capital.

Several countries have sent young and experienced boxers with proven records, who are capable of running even the Olympic medallists close in each category. The contestants, especially from the US and Puerto Rico and some European countries apart from the Asian nations are expected to lead the way.

The significance of the championships can be gauged from participants of the 12 countries that arrived a week before to get themselves acclimatized to the conditions and spar with pugilists from other countries to prepare for the D-Day. All the boxers, especially the visitors, expressed their satisfaction at the facilities, calling it ‘exceptional.’ They even acknowledged it in their feedback to AIBA, which has been constantly interacting with them.

“I am happy all the boxers have had a wonderful time during their practice sessions. It was a priority for us as we were committed to take care of this aspect, providing them with similar conditions that will prevail during the championships,” said Ajay Singh, president of BFI.

BFI President thanked the Government of India, Sports Ministry and Sports Authority of India for lending a supporting hand which made the organization that much easier. “They have extended full support to make the event a great success,” he added.

If India’s top contender M.C. Mary Kom, who is chasing her dream of sixth world crown, is the favourite in 48 kg, there are other serious gold medal challengers like Virginia Fuchs (51 kg) from the US, Lin Yu Ting (54) from Taipei, Yin Junhua (57) from China, Mira Potkonen (60) from Finland, Simranjit Kaur (64) from India, Gu Hong (69) from China, Nouchka Fontijn (75) from the Netherlands, Wang Lina (81) and defending champion Yang Xiaoli (+81), both from China, to name a few, along with other Olympic and European championships medal winners.

May Kom and other Indian boxers were confident of a good show and expected the crowd support to back them. “We have a distinct advantage in front of the home crowd and they will definitely shore up our confidence,” said Mary Kom. “We have been training hard at the camp and are sure of doing well,” added the Indian legend.

Mira Potkonen, the only Finnish boxer to win medals in world championships (Asthana) and Olympics (Rio) was equally thrilled to be here. “I am looking forward to make this world event a memorable one for me personally and hope to win a gold medal,” said the 37-year-old, whose ring craft and defence have been her assets.

To ensure smooth conduct and comfort of participants, the BFI has for the first time roped in 20 junior boxers, drawn from different states and academies, as volunteers. “This would give a lifetime opportunity to these young, budding boxers a ringside view to watch the bouts,” said the BFI Chief.

The organizers have plans for a grand opening ceremony, showcasing various Indian dance forms and martial arts to regale the audience, a day before the championships. The other performances include Shillong Chamber Choir, Light & Sound show, including LED drummers and fusion music.

The spectators can buy tickets from PAYTM app, pricing starts from INR 50 onwards. The world championships bouts, for the first time, will also be telecast live on Star Sports Select 1 and HD 1.