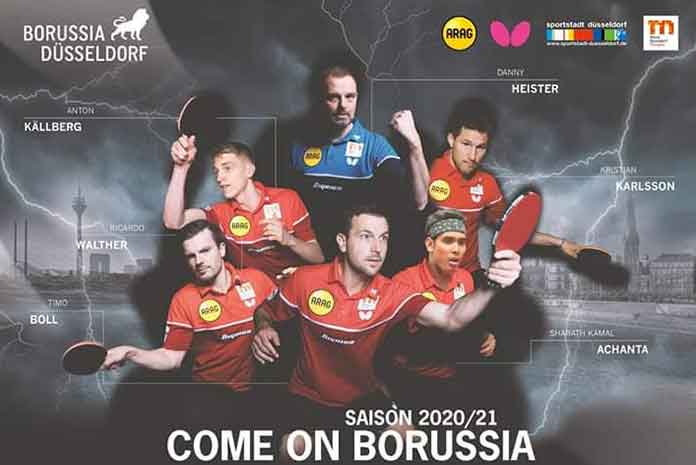 Indian table tennis legend Achanta Sharath Kamal is elated as he will be again participating in the upcoming European Champions League for his German Club, Borussia Dusseldorf. Kamal will play his 7th consecutive season in the most premier European Table Tennis competition. Sharath spoke to Vishal Sharma and said he is extremely pleased to be part of the team which has players of the caliber of  former World No.1 Timo Boll, Kristian Karlsson, Ricardo Walther and Anton Kallberg. Vishal caught up with Sharath Kamal for an exclusive interview in which he talked about his journey and experiences so far in the European competition and otherwise.

VS: This is going to be your 7th season with Rekordmeister Borussia Dusseldorf, can you take us through the journey so far?

Sharath Kamal: I played my first season with Borussia Düsseldorf in 2013 to 2014. It was a dream come true for me because I had moved there for practice 1 year prior to the season and coaches and management were pretty impressed by my game and my character, so they contracted me for 2013-14 season. And for me it was a dream come true as I could play with, you know, former World number 1 Timo Boll on the same team.

VS:  You played your sixth season last year only with Borussia Dusseldorf. How do you feel be a part of the team  this year as well?

SK: I have played for many clubs in Europe, but one club which is very close to my heart is Borussia Düsseldorf.  I have had fantastic memories with them, won lot of titles and you know it is great team great management, it is always nice to play there

VS: Would it be beneficial for you to play in league along team mates former Olympic medalist Timo Boll and European champion Kristian Karlsson, so that you perform better in tournaments ahead?

SK: You tend to learn a lot form these top players in the world like Timo Boll or Kristian Karlsson. Earlier I was playing with Panagiotis Gionis from Greece, so I learnt a lot of tactical play against defensive players. Even I have played with Patrick Franziska at the same team. Many top players have played alongside and it is a great experience to be with them to understand how the game is played and what it takes to be a top-level player.

VS: How do you feel playing in TTCLM that too consistently for the last six season and for the same club? Share your experience with team?

SK: Champions league is one of the best leagues in the world. It is a great exposure as a player because you travel a lot to different counties in Europe and play different style of players, so that helps you evolve into a complete player. And to also compete and beat some of the best players in the world, you need those matches which helps you in order to prepare and understand what kind of practice you need to do and what kind of training it requires and how do you actually perform in those big matches.

VS: What are you major Contributions for the Club Borussia Dusseldorf?

My major contribution to the club has been I think, I have always played quite a good supporting role to Time Boll every time he was there. He is really good, he does his job and I am supporting at position 3 or at position 2 many times. And, sometimes when he doesn’t play, I have also on position 1. So, I have contributed quite well as a team player and that is the reason why they continue to sign me up for the club.

VS: Which was your most difficult win the previous seasons so far? How you’ll gonna prepare for coming season now?

SK: We have had some difficult seasons, specially the year 2015-16 when Olympic games was going to be played. We had lot of injuries on the team, Timo was quite often injured and Patrick Franziska also was injured and I was coming back from 2015s injury, 6 months break and, so we had a struggling period at that point of time. So, we were close to be out of the play-off’s when fortunately just in the last match of that regular season, we won our match and the other team who could make it to the play-off’s, they loss. And, once we got in there then we went on to win the title, so from a season which was so unpredictable where most of us were injured and things were not coming all right. From there we gone to win the season which you know, was a really good feeling.

VS: Which is the most memorable season for you and why?

SK: My most memorable season will be 2014-15, that was one of the best table tennis I have ever played, we didn’t loose one single match in the entire regular season. In the play-off’s we lost one match in the Bundesliga and in the Champions League we lost in the final. So, we won the Bundesliga final, we won the German Cup. So, that was a pity that we couldn’t win the Champions league but by far it was the best season I have ever had.

VS: What’s your big aim for your club Borussia Dusseldorf in upcoming season later this year?

SK: The big aim for the club is the last couple of years we have lost out on the German Bundesliga title. So, would like to win that back and personally for me I haven’t won Champions league title so, that’s something which I would like to win too.