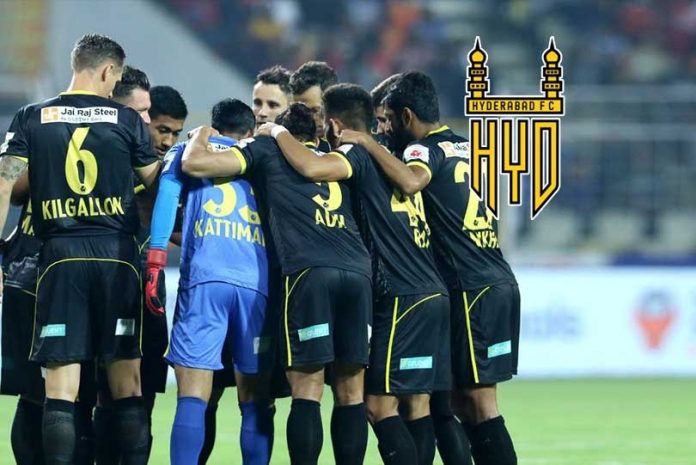 Indian Super League (ISL) franchise Hyderabad FC (HFC) debuted in 2019 and in its first season itself. Even after ISL 2019-20 season got over 70 days back, the debutant ISL Club is yet to clear the pending payments of the players and the coaching staff. The matter has reached such stage that All India Football Federation (AIFF) has to intervene.
According to a report in The Hindustan Times, Hyderabad FC have been given till May 15 to clear pending payments worth $646, 918 (almost Rs 4.9 crore) to five players and three in the coaching staff including former head coach Phil Brown. The decision was taken on Wednesday by the players’ status committee of the AIFF. The players who wrote to AIFF seeking redressal are: Marcelo Leite Pereira (Marcelinho), Marko Stankovic, Deyvison Rogerio da Silva (Bobo), Giles Barnes and Matthew Kilgallon.
The committee has further communicated to Hyderabad FC management that  “stringent” action will be taken if the deadline is missed and the pending payments are not made.
Some players of Hyderabad FC and Phil Brown, who was sacked as head coach in January, had written to the All India Football Federation (AIFF) saying they have not been paid this year. The newest franchise of ISL – Hyderabad FC played their last match on February 20. They finished last in the 10-team competition that began on October 20, 2019.
“The foreign players are in discussion because all the payments from Hyderabad happened with delays of 2 or 3 months (sic). Of course, understandable because is a new franchise. The point is: all the deadlines have been told with lies and now with the corona outbreak, they said it is not possible to make any payment. We know the bank is open and working normally,” a foreign player said. The player requested anonymity given the delicate nature of the issue.
“The players are in a difficult situation with quarantine and trying to find a solution,” he said. Brown, who coached Hull City from December 2006 to March 2010, has written to the AIFF separately, a federation official said. “Brown’s letter reached the AIFF nearly a fortnight ago. The players wrote to the federation at the end of the season also saying they haven’t been paid since the turn of the year,” said the official.
The ISL ended on March 14 with the final in Goa between winners ATK and Chennaiyin FC played behind closed doors.
InsideSport tried reaching out to Hyderabad FC management for their response to the AIFF deadline and specific claim of payments not being cleared, but no answers came in.