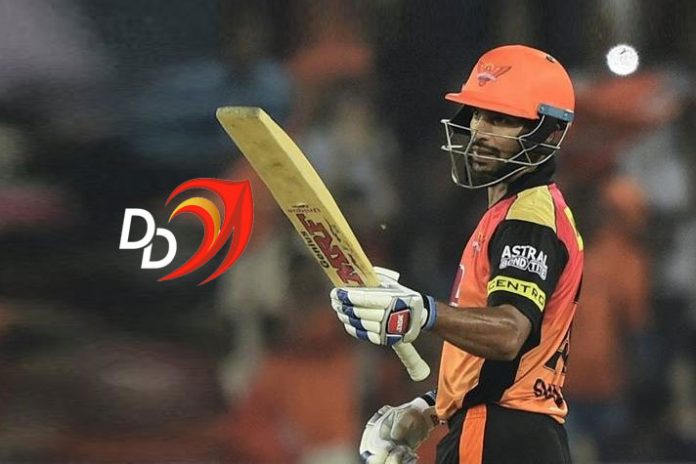 Shikhar Dhawan is set to make a homecoming with the Indian Premier League Season 12. The Delhi southpaw is reported to have agreed to play for Delhi Daredevils in the next edition of the IPL in what is said to be an exchange deal with Sunrisers Hyderabad.

The Indian Premier League Delhi franchisee, still looking for its maiden league title, is reported to have agreed on a deal with the Sunrisers to get Dhawan. The GMR-JSW owned Delhi Daredevils will release their three players in an exchange deal for Dhawan.

Delhi Daredevils new management, after exit of former Chief Executive Hemant Dua, has agreed to bag Dhawan in the deal for Vijay Shankar, Abhishek Sharma and Shahbaz Nadeem. The trio will move to Hyderabad.

Sunrisers Hyderabad had acquired Dhawan for a ₹ 5.2 crore successful bid ahead of the IPL Season 11 last year. The India and Delhi opener was reportedly not happy with the deal. The Hyderabad franchisee has thus agreed to release Dhawan for the Delhi Daredevils’ trio, whose aggregate salary would cost Delhi ₹6.95 crore. Sunrisers will reportedly pay to the Delhi team management the difference between the salaries of Dhawan and the trio.

Dhawan had represented Daredevils in the inaugural season of the league in 2008. After playing for Mumbai Indians and Deccan Chargers, the hard-hitting left-hander had moved to Sunrisers Hyderabad, for whom he remains the top scorer with 2,768, averaging 35.03 runs in 91 innings.

Earlier reports suggested that Dhawan was in talks with Kings XI Punjab, negotiating a 100% rise in his pay. Since, the Punjab camp offered him only a ₹ 1 crore hike he accepted the Delhi deal which was marginally matter.