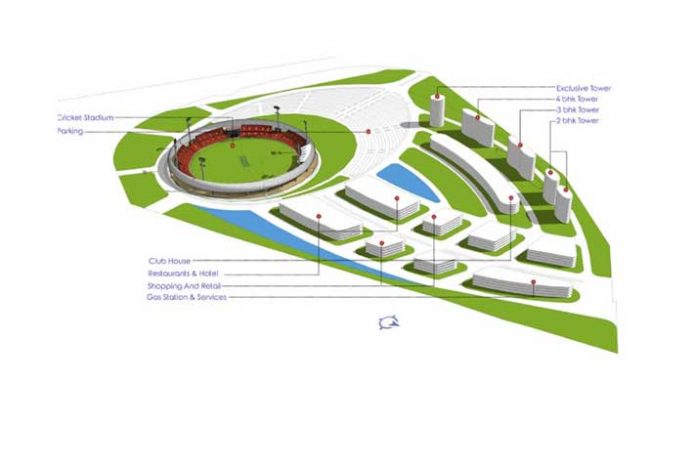 Thakkar Developers and Global Sports Ventures of Philadelphia, in an email to announce the development, have confirmed that they “are collaborating to build a cricket stadium to be located within a unique mixed-use development in Allen, Texas”.

In 2017, Global Sports Ventures had announced plans to work with JLL’s sports and entertainment group as part of an effort to bring a professional cricket league to the United States by 2020. JLL was to manage site selection and oversee the development of eight cricket stadiums, including in Texas, California, Illinois, Florida and New York.

The connection between that project and the one to be announced Tuesday was not immediately clear.

Allen officials confirmed that talks were underway, Dallasnews.com has reported.

“We are working with the Thakkar development but there’s not been an agreement that’s been finalized as yet,” an Allen spokeswoman said.

The city is considering assisting the project with a grant for infrastructure improvements, along with potential incentives. Texas’ local government code allows cities to offer incentives to promote economic development, such as commercial and retail projects.

A posting on Thakkar’s website, under the heading “Allen Sports Village,” describes a “proposed mixed-use development, anchored by a multi-use sports complex, training facilities and event center [with] 500,000 square feet of Class A office space.”

It also would include more than 1,000 new residential units, potentially including town homes, condos and apartments. The proposal also calls for two hotels in a high-rise condominium tower and about 165,000 square feet of shopping, including a grocer.

The project will reportedly come up at an expected cost of more than $500 million.

If the project moves forward, it will be another indication that investors are banking on cricket’s growing popularity in the U.S.  Last year, the Dallas Cricket League had more than 100 teams and included players as young as 5. The U.S. fan base for cricket could be as large as 20 million, according to Forbes. A major cricket complex recently was built in Hempstead, near Prairie View A&M, the Houston Chronicle reported.