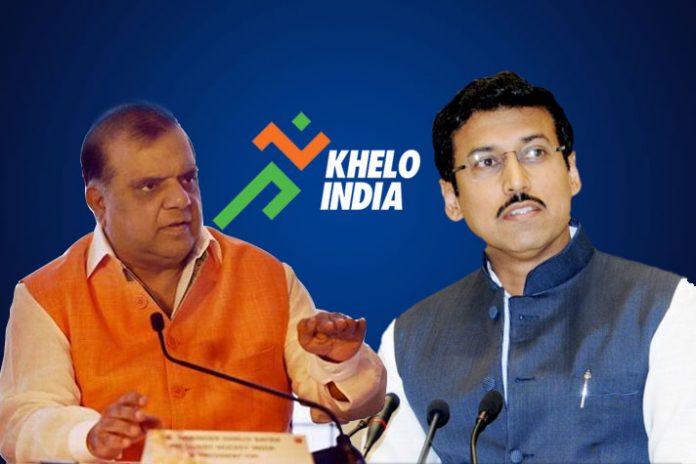 The Indian Olympic Association has taken an aggressive stand against the Ministry of Youth Affairs and Sports and Sports Authority of India, which holds the threat of escalating the unrest between the national governing body for sports and the supreme bureaucracy for sports in India.

That the IOA President Dr. Narinder Dhruv Batra and the Minister of Youth Affairs and Sports Rajyavardhan Singh Rathore are not on the same page has been evident with their contradictory views of late.

The tension may further escalate after scroll.in has revealed the content of the letter Dr. Batra has written to the national sports’ federations. The letter establishes that the IOA is not at all game for the Khelo India Games, a brain-child of Prime Minister Narendra Modi and beloved baby of the Sports Minister.

The Field, sports section of scroll.in, claims to be in possession of an email, in which Dr. Batra has reportedly advised the IOA’s member units to refrain from Khelo India activities. “I will strongly recommend that no member unit of IOA should meet with SAI/MYAS for anything concerning Khelo India Programme until the real intentions of the present setup in SAI/MYAS becomes abundantly clear to us,” the mail reportedly reads.

Dr. Batra is enjoying the support of a strong faction in the IOA. A senior “power player” in the IOA politics, while insisting that “all is well between Dr. Batra and Sports Minister Rathore at a personal level” told insidesport.co that “Dr. Batra has raised a valid issue. We all know about Khelo India Games. Dr. Batra has only expressed a common feeling,” the former sports administrator said.

Dr. Batra had reportedly insisted that SAI and the Sports Ministry were resorting to divide-and-rule tactics and member units should not allow them to interfere in the national federations’ independence and autonomy.

In his communication with the member units, Dr. Batra has also shared an email chain between him and Deputy Director-General of SAI, Sandeep Pradhan, over the formation of Khelo India’s High Powered Committee for Talent Identification and the guidelines for the same, and his response to the concerned officer stating that he would only communicate henceforth with Director General, SAI, Secretary Sports or above, states the Scroll.in report.

Dr. Batra and the Sports Minister had recently expressed conflicting opinions from the same platform on funding of national sports federations. While Rathore has asked the NSFs to be financially self-sufficient, Dr. Batra had strongly responded that no national sports Body except the Board of Control for Cricket in India can sustain in the country.

There has also been an ugly spat earlier between Dr. Batra and Sports Secretary Rahul Bhatnagar.

The sports secretary had strongly condemned Dr. Batra’s statement that “sports should get rid of idiotic, joker bureaucrats, that have zero idea”, Bhatnagar had slammed the IOA chief who earlier said that, “sometimes we have idiotic bureaucrats coming in and they have made everyone’s life miserable. You need some intelligent people who understand sports rather than some joker coming in from Mars and giving ideas, while they themselves have zero idea about what is happening.”

Dr. Batra was reacting to the MoS directive that now the NSFs will be required to inform the MoS well in advance before bidding for an international event. Bhatnagar had insisted “it was logical and fair” for the ministry to seek advance information.

The prevailing situation is not good for the health of Indian sports, which has been showing signs of improvement. This all happens when on field Indian athletes are getting recognition, laurels, and success – graduating from the “playing for pride” notion, going beyond strong contenders tag to return with glittering medals. Making headlines for all the good reasons – from golf courses to shooting ranges.

In sharp contrast, an anti-climax looms large in the corridors of sports power. The national governing body for Olympic sports, the Indian Olympic Association, and the supreme bureaucracy for sports governance in India – Ministry of Youth Affairs and Sports and its arm for development of sports and sports infrastructure Sports Authority of India – are at loggerheads. A never before situation prevails between the IOA and the MYAS and SAI. The clash of administrative egos and one-upmanship hold a potential threat of wrecking the weak fiber of sports administration in the country.

The developments on the field will reveal an ALL IS WELL scenario on the field. Beyond the boundaries, behind the walls of the IOA, MYAS, and SAI seems to be brewing a tense situation detrimental to the improving health of Indian sports close on the heels of the Gold Coast Commonwealth Games and the Jakarta Palembang Asian Games later this year.

As the nation celebrated Telangana girl Aruna Reddy’s bronze at Gymnastics World Cup, Shubhankar Sharma’s heroics at WGC-Mexico Golf Championship, Manu Bhakher’s shots on twin gold at the ISSF World Championship; an unwarranted and unwelcome unrest between the IOA and the MYAS has come to the fore.