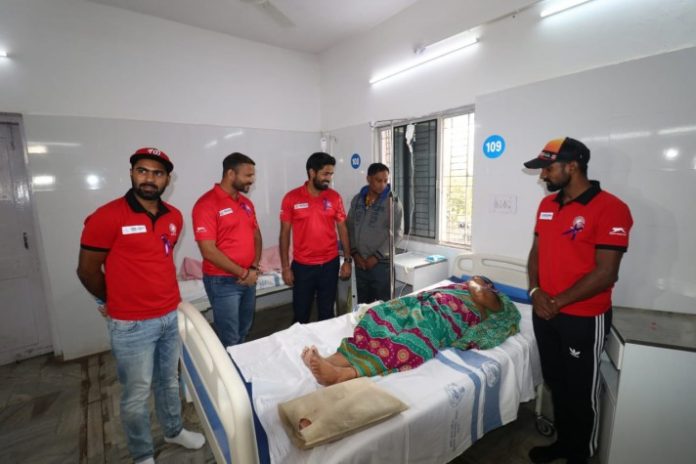 On the occasion of World Cancer Day, players and staff of the Indian men’s hockey team expressed their support to the patients and spent time of the people undergoing treatement at the Capital Hospital in Bhubaneswar on Tuesday.

Members of the Indian men’s hockey team met with patients undergoing treatment for cancer in Bhubaneswar as part of the World Cancer Day awareness program, Hockey India stated in a Press release.

With the support of Konark Cancer Foundation, an NGO which helps affected patients in distress, eight players – Akashdeep Singh, Varun Kumar, Simranjeet Singh, Sumit, Suraj Karkera, Dipsan Tirkey, Nilam Sanjeep Xess and Jaskaran Singh – along with coaches Shivendra Singh and Piyush Kumar Dubey visited the cancer wing of the Capital Hospital to interact with and show support to the patients.

Speaking on the occasion, Akashdeep Singh said the team wanted to give back to the community on the occasion of World Cancer Day. “On the occasion of World Cancer Day, we wanted to show our support towards the patients affected by this deadly disease. We have always been blessed with the support of millions of fans, and in return, on behalf of Hockey India and the Indian Men’s Hockey Team, we want to make sure that through such initiatives we can help in spreading more awareness about the disease,” he said.

During the visit, the team also witnessed a street show organised by the NGO, and then progressed to the cancer wing to meet 25 patients, who were also provided with fruits by the players.