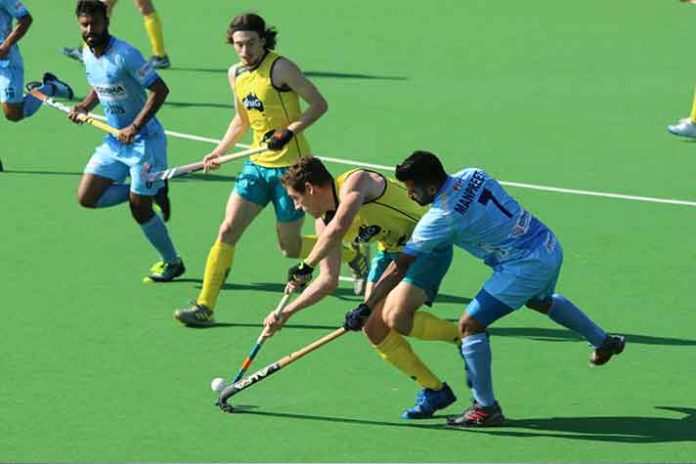 Two good saves in the initially minutes of the first quarter by goalkeeper Krishan Pathak and Gurinder Singh while defending back-to-back PCs awarded to Australia ‘A’ was confidence-boosting for India. The attempt had somewhat made up for an average start by the visitors as Australia ‘A’ attack put the team under pressure right from the start.

While the first quarter ended in a stalemate, the visitors suffered a setback in the 21st minute when Kiran Arunasalam struck a fine field goal for Australia ‘A’. “We had a poor start in the first ten minutes of the game which was a complete opposite to how we played on Friday,” expressed Chief Coach Graham Reid commenting about today’s match.

“We slowly got back into the game in the 2nd, 3rd and 4th quarters and also created enough opportunities to win the game,” Reid said. However, not being able to convert the chances created in the striking circle and missing out on three PCs dented India’s fightback.

India’s defence, on the other hand, was able to contain the home team from taking a further lead and also came up with commendable PC defending to deny Australia ‘A’ from converting the two PCs they were awarded in the second and third quarter respectively. It was in Harmanpreet Singh‘s second attempt in the 56th minute that he converted a well-timed, powerful dragflick to equalise the score to 1-1. His previous attempt only a minute earlier was well-saved by Australian defender.

On Wednesday, India will take on the Australian National side in what promises to be yet another exciting game and if India wish to emerge on top, Reid said the team will need to start much better and keep the pressure on their opponents in all four quarters. “On Wednesday we will need to start much better and play well in all four quarters. In tomorrow’s practice session we will be working on our connections especially in the midfield,” stated the Chief Coach.