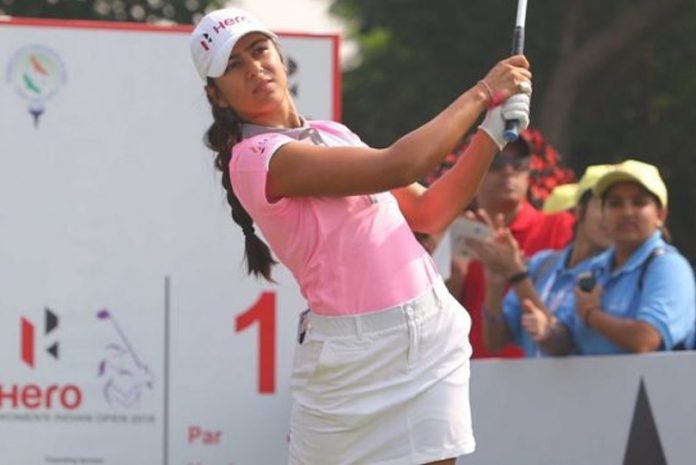 Indian golfer Tvesa Malik overcame a double bogey start to put herself in contention for her first professional title outside the country with a second straight 69 that took her to tied sixth spot at the Flumserberg Ladies Open here.

She is currently at six-under. Tvesa, who had hat-trick of birdies from second to fourth, is three shots behind the overnight leader, Stina Resen (65-70), who was nine-under for 36 holes. The 54-hole event ends on Saturday.

Diksha Dagar (73-74) also made the cut and was placed tied 38. The cut fell at seven-over with 53 players making the final round.

Diksha had an incredible round of two-over 74 which included one double bogey on Par-3 third, which she had birdied on the first day. The rest 17 holes were parred.

Finland’s Tiia Koivisto 971-65 was sole second, while three players were tied for third at seven-under.

Tvesa opened with a double bogey on the first but hit back immediately with three birdies in a row. Four pars followed by a birdie on ninth saw her turn in two-under for the day and she moved to five-under for the tournament.

Two more birdies on 11th and 13th saw her rise to four-under for the day and at seven-under for the tournament and was tied second.

A bogey on 15th and another bogey on 17th with a birdie in between on 16th saw her card another 69 to finish at six-under 138. Tvesa’s best at a Ladies European Tour event is tied sixth at Hero Women’s Indian Open last year.

Starting the day three shots ahead of the chasing pack, Resen showed no sign of early nerves and quickly added to her lead with birdies on the second before making four consecutive gains in a row from the fourth.

Standing on the eighth tee, the Norwegian led by as many as five shots from the chasing pack, which included Sanna Nuutinen and Swiss amateur Caroline Sturdza, who had already completed their second round.

Resen had three bogeys around the turn at eighth, 10th and 12th but bounced back with a crucial birdie on the 18th for a two-under-par round of 70 and reclaim the all-important lead.

Trailing by a shot in sole second place after a sublime bogey-free 65 (-7), Finland’s Tiia Koivisto closed with three birdies to force her way into the final group as she chases her first LETAS victory.

The 26-year-old is rooming with her good friend and compatriot Sanna Nuutinen this week and just missed out on enjoying her company on the course as she is joined in the final group by 18-year-old Swiss amateur Caroline Sturdza.

PKL 2021 LIVE: How to watch season 8 of Pro Kabaddi league live Streaming in your country, India