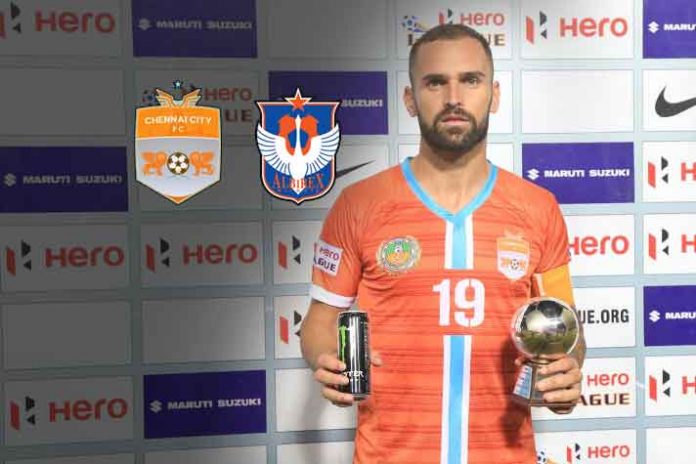 The transfer deal for the Uruguayan-Spanish professional footballer, according to national daily Times of India, was agreed by the I-League club for a record value of about ₹ 1 crore.

The I-League ‘Golden Boot’ winner had joined the Chennai City FC on October 28, 2018. The star striker had struck four hat-tricks during the 2018-19 season. He was League’s joint highest scorer with Churchill Brothers’ Trinidadian international striker Willis Plaza – both netting 23 goals each.

Manzi had moved to the Japanese club as he wanted a fresh challenge. “I would like to thank everyone in Chennai City and the club will always remain in my heart. I also want to thank everyone involved in Albirex Niigata for giving me a new challenge. I go to Japan with hope and will work hard to achieve the goals set by the team,” Manzi said in a statement.

Albirex had reportedly approached Chennai City FC for acquiring Manzi. “Albirex had appointed former New York City FC assistant coach Albert Puig as their coach a couple of months back. Puig was looking for a striker and he knew about Manzi from one of the fellow NYC assistant coaches Jordi Gris,” Chennai City FC president and co-owner Rohit Ramesh has told the Times of India.

“Jordi used to be a CCFC assistant coach and he was the one who brought Manzi to CCFC. So he immediately asked me whether Manzi is for sale. I told him we can think about it if a good offer is on table. It was then that Albirex contacted us and we started negotiating.

There were also interests for the striker from the ISL clubs, but the Japanese club clinched the deal with their record offering. “The ISL clubs were not offering us the right terms and conditions. So we thought that it’s better to keep him at our club. But Albirex’s offer was quite good and Manzi was okay with the move,” Rohit added.  “This is how all major deals were done all over the world. Barca also raked in huge money when they sold Neymar. So we generated good revenue after selling him. Now, we are in the market for reinforcements.”

However, only after a season, the club decided to release its best possession in the record transaction after the I-League was deprived of the status of India’s premier club football league in favour of the cash rich Indian Super League.