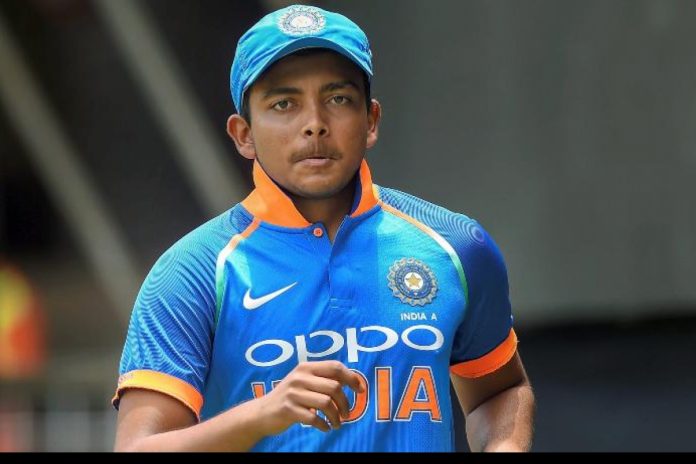 India tour of Sri Lanka: Set for an important role in Sri Lanka, Prithvi Shaw is determined to grab the opportunity when it comes his way. While Shaw will need to battle it out with 3 other openers for the opening spot, he will be given importance on the tour under Rahul Dravid’s mentorship. The Shikhar Dhawan led Team India will play 3 ODIs and as many T20Is, starting July 13.

“As Rahul sir is there, one will expect discipline in the dressing room. I’m looking ahead to the practice sessions with Rahul sir because I love to speak to him for hours. This tour, I just have to grab the opportunity. I was desperate to get back in the Indian team. I have always kept the team above me. Be it India, Ranji Trophy team, club or my school team. I want to give my best,” Prithvi Shaw told Indian Express before leaving for Colombo.

Also Read: India tour of Sri Lanka: Prithvi Shaw’s big pledge, ‘I will use the opportunity to the fullest’

India tour of Sri Lanka: While Prithvi Shaw could be called to England and miss the entire Sri Lanka series, if not, the series will be a confidence booster and a bulk of runs will help him get his place back in Virat Kohli’s core Team India. That he will once again work under Rahul Dravid will be helpful for him to regain the lost confidence, playing for India.

“There is a different kind of enjoyment playing under Rahul Dravid sir. He was our India under-19 coach. The way he speaks, the way he shares his coaching experience, is just amazing. Whenever he talks about the game, it shows how much experience he brings to the table. He knows everything about cricket. The way he speaks on conditions and how to use them, is just out of this world,” Prithvi Shaw said.

The Mumbai youngster recalled how supportive the former Indian captain was during his dope ban. “On A tours, I did speak to him. When I got banned for doping, he called and said, ‘This is part of life. It’s ok. It wasn’t my fault and I will come back stronger.’ It felt really nice that he talked to me even during my bad phase,” Shaw said.

India tour of Sri Lanka: After Shaw was dropped from the Australia tour, he returned home and worked on his technique to unleash Prithvi Shaw 2.0, a more lethal version that thrashed bowlers for fun. Since Vijay Hazare Trophy, Shaw has scored at a strike rate of 145 in 16 games including IPL 2021. In VJT, he averaged a staggering 165.40 while in IPL 2021, he managed a 38.50 average for Delhi Capitals. Once again, he is expected to open the innings with DC opener Shikhar Dhawan against Sri Lanka. At the moment, he is relishing the chance he has received to represent India again.

“It felt nice. I was scoring runs and somewhere there was a feeling that I should get a call again, because of the way I was batting and runs were behind me,” Prithvi Shaw said.

“Everyone knew that I had worked hard on my batting and there is some change in my technique too. During the Australia tour, there was lot of talk about my technique. There was talk about my fitness. This time, everyone felt and saw that I have worked hard. I was just eager to make my comeback. I don’t bother what others feel but I felt I needed to improve on a daily basis,” he added.

However, despite going through the lows and highs in such a short span of his international career, Prithvi Shaw said he still follows the rule of no practice on bad days — something that DC coach Ricky Ponting lamented about.

“It’s the same now. Personally, I feel that if I push harder – especially when things are not going right for me – it just doesn’t happen to me. I’m not the one who tries to show others that I’m working hard. There is a voice from within, which says ‘no more’. I don’t force myself. I just take a break then and start again next time when I feel I’m feeling much better,” he said.

For updates on cricket and other sports, follow insidesport.co and Moneyball for IPL and ISL players’ salaries