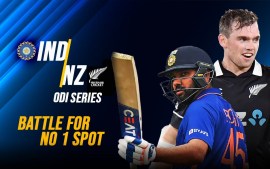 The Hindi studio show will be presented by former cricketers namely Mohammad Kaif, Vivek Razdan, Amit Mishra, Saba Karim along with Arjun Pandit. The Tamil commentary box will feature Laxman Sivaramakrishnan, WV Raman, Vidhyut Sivaramakrishnan, T Arasu, and S Seshadri while the Telugu commentary will be presented by Venkatapathy Raju, Gnaneshwar Rao, C Venkatesh, RJ Hemanth, Sandeep Kumar, and Vijay Mahavadi. Led by Shikhar Dhawan and coached by Rahul Dravid, the young side will play three ODI and three T20Is against Sri Lanka. The series will be aired in India live in four languages: SONY TEN 1 and SONY SIX in English, SONY TEN 3 in Hindi and on the newly launched SONY TEN 4 in Tamil and Telugu from 1.30 pm IST as well as live streamed on its on-demand OTT platform SonyLIV.

Devdutt Padikkal, Ruturaj Gaikwad, Nitish Rana, Krishnappa Gowtham, and Chetan Sakariya are likely to receive their maiden Indian cap in ODIs and T20Is and will have the experience of seasoned players like Hardik Pandya, Krunal Pandya, Suryakumar Yadav and more by their side.

Dravid on Sunday said he hopes the white-ball squad is able to give good performances so that they are able to knock the doors of selectors for a call-up for the T20 World Cup which is set to be played later this year in UAE.

“So like you said, rightly there are a lot of people in the squad who are pushing for places or looking to cement their places in the sort of T20 World Cup. But the key goal for everyone in the squad and in the team is to try and win the series, we have had discussions around it.

“That is the primary objective. We are going out there to win the series, hopefully, people get the opportunity to put in good performances in the course of us trying to win the series, and knock the doors of the selectors,” said Dravid while replying to an ANI query during team’s pre-departure press conference on Sunday.