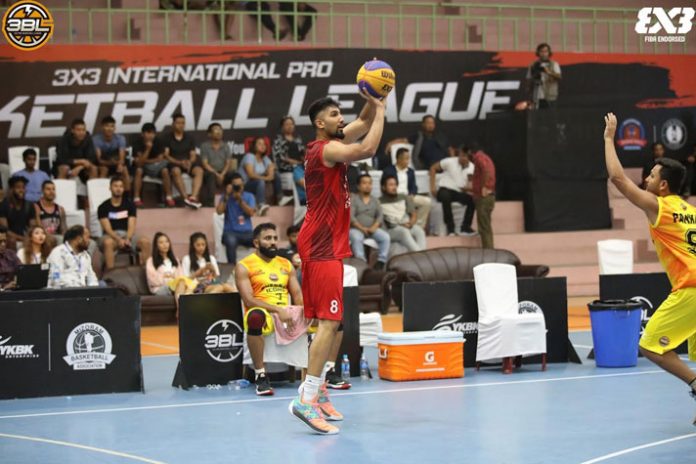 One of the most prestigious 3×3 basketball tournaments in the world, the FIBA 3×3 World Tour Masters is coming to India for the first time on 22nd and 23rd September 2018 for the Hyderabad Masters at People’s Plaza, Hyderabad. Participation will be seen from the leading international 3×3 teams and top two 3BL teams – Delhi 3BL and Bangalore 3BL.

The qualification for Indian 3×3 teams was decided on the basis of the results of the inaugural season of 3×3 Pro Basketball League (3BL) which was held from June 9 to August 26, 2018 across six cities in India. The two leading teams – Delhi , which won five rounds out of six and Bangalore, which won one round. Members of team Delhi are- Inderbir Gill, Bikramjit Gill, Leandro Souza de Lima and Kiran Shastri. Members of team Bangalore are- Sowkin Shetty, Amit Sehrawat, Rajan Sharma and Lalrina Renthlei.

Hyderabad Masters is the seventh stage of the FIBA 3×3 World Tour and is the first time an international 3×3 basketball tournament is being played in India. The participating teams will compete for a chance to qualify for the FIBA 3×3 World Tour Bloomage Beijing Final onOctober 27-28, 2018. The best international teams like Novi Sad (World #1), Piran (#3), Belgrade (#9) and more, along with top international players like Simon Finzgar (World #8), Anze Srebovt (#9) and Gasper Ovnik (#10) will be playing at People’s Plaza in Hyderabad.

The inaugural season of 3BL had received brilliant response from audiences and athletes alike. The Indian basketball players got exposure to international players and styles of play to improve their game. With the matches being held in high engagement places like malls in each of the cities, the audiences could witness the fast-paced entertaining sport with ease. 3BL also made extensive efforts towards grassroots level development of the game by conducting coaching clinics for young students in each of the cities.

Speaking about the FIBA 3×3 World Tour, Hyderabad Masters, Yoshiya Katoh, Chairman, 3BL, said, “India is getting a chance like never before – to host the FIBA 3×3 World Tour. Only nine other cities in the world have been the hosts in this edition. This is an opportunity for Indian basketball players to compete against the strongest opponents and improve their game. We are proud to be a part of this landmark moment.”

Rohit Bakshi, League Commissioner, 3BL, said, “One of my biggest dreams has been to see an Indian team win a medal at an international platform in 3×3 basketball. Team Delhi 3BL and Bangalore 3BL both have the potential to emerge at the top in Hyderabad Masters and qualify for the FIBA 3×3 World Tour Finals. Moreover, competing against international teams is only going to be improve their game and increase our chances for 2020 Tokyo Olympics.”

Vivek Krishna, Entertainment Director, 3BL, said, “The inaugural season of 3BL was a massive success with the Indian audiences. The sport is perfectly suited to our liking, with its entertainment and glamorous elements. At the FIBA 3×3 World Tour, Hyderabad Masters, it’s going to be even better with the best international players, dunkers and more.”