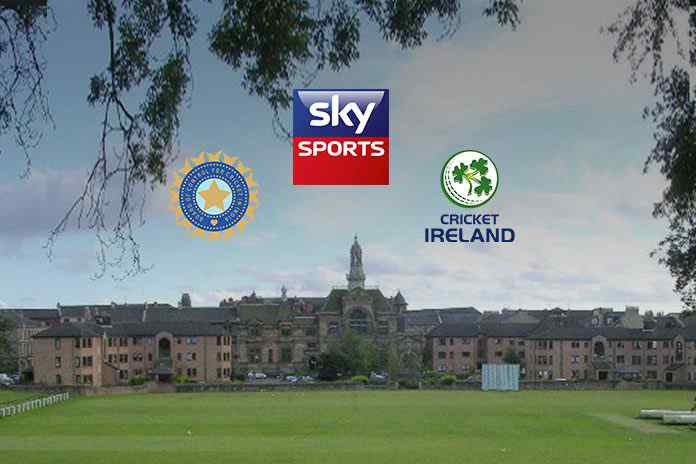 Pay-TV broadcaster Sky Sports will broadcast the two-match Ireland-India series next month in the UK and Ireland. The Indian cricket team is scheduled to play against hosts Ireland in two T20 Internationals on June 27 and 29.

However, an Indian broadcaster for India’s short tour of England has not been finalized as yet.

Sky Sports has secured exclusive rights to Ireland’s first ever Test match, against Pakistan from June 11 to 15. Ireland, alongside Afghanistan, were awarded a full-member status by the International Cricket Council last year, expanding the number of Test-playing nations from 10- to 12.

Warren Deutrom, Chief Executive of Cricket Ireland, has confirmed the details of the largest broadcast rights package in Irish cricket history. “This broadcast package is set to break Irish sporting records, as we anticipate that the T20I series against India alone will be the biggest worldwide TV audience of any event – sporting or otherwise – ever staged in Ireland,” said Deutrom.

“Since being confirmed as a Full Member of the International Cricket Council in June 2017, we have seen unprecedented interest in Irish cricket – most notably from a range of potential broadcast partners. We are delighted to announce the structure of the broadcasting schedule for the coming season, and we anticipate our fans worldwide will be pleased with the comprehensive nature of the package,” added Deutrom.

As per the terms of the three-part broadcast package, Sky Sports will broadcast ball-by-ball coverage in the Ireland and UK markets of the Test Match against Pakistan (11-15 May 2018) and the two T20Is against India (27 and 29 June 2018).

RTÉ Television will broadcast a 1-hour highlights package of every day’s play for the Test Match against Pakistan and the two T20Is against India.

Pitch International has sold the overseas television broadcast rights in a number of countries, across a number of networks including in key markets like the US, Canada, sub-Saharan Africa, the Middle East, South Asia and Australia.

“The combined broadcast audience for our summer of men’s cricket will reach many millions of sets of eyeballs – a remarkable achievement for a sporting team that only entered the global consciousness just over a decade ago after its heroics at the 2007 Cricket World Cup,” said Deutrom.

“It’s been an amazing trajectory over the last 10 years. From playing in front of a few hundred a few short years ago, to playing last year at Lord’s Cricket Ground in front of 25,000 – and now we are set to take that next step. To know so many people around the world are interested in our team should be a moment of pride for everyone connected with Irish cricket.”

Further announcements will be made shortly about the broadcasting arrangements for ball-by-ball radio broadcast of the Test and T20I series, as well as the forthcoming Afghanistan series in August 2018.