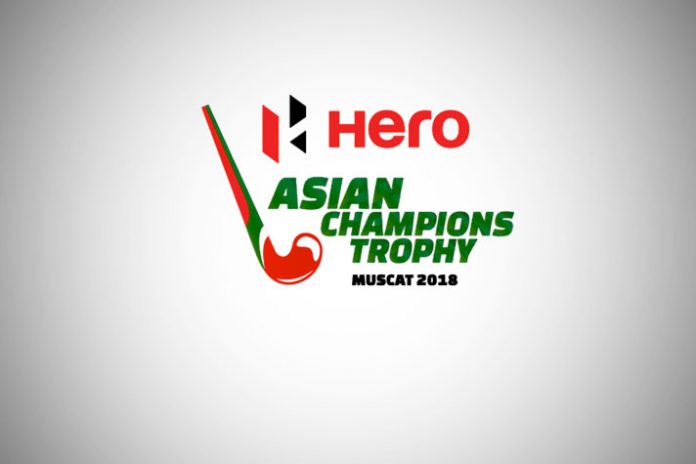 A confident India is ready to defend the Hero Asian Champions Trophy Hockey title as the tournament gets underway in Muscat on October 18.

With ten days to go for the prestigious Hero Asian Champions Trophy Muscat 2018, the anticipation and excitement among the participating teams is palpable. Starting on October 18, the premier continental tournament will see host nation Oman along with Asian Games Gold Medallists Japan, Defending Champions India, Pakistan, Malaysia and Korea take on each other in a battle for supremacy at the iconic Sultan Qaboos Sports Complex.

AHF President HRH Prince Abdullah Ahmad Shah today (Monday) confirmed that the coveted trophy for the Hero Asian Champions Trophy Muscat 2018 will be unveiled on  October 16 in Muscat. “The AHF is pleased to announce that the Trophy unveiling for the prestigious event will be held on October 16 in Muscat. This edition of Hero Asian Champions Trophy Muscat 2018 is crucial for the participating teams especially those who are taking part in the Odisha Hockey Men’s World Cup Bhubaneswar 2018. I expect the competition to be fierce and engaging for the global audience.”

HRH Prince Abdullah Ahmad Shah further thanked Hero MotoCorp for their continued support as the lead partner of Asian Hockey Federation. “We are once again grateful to have Hero MotoCorp, one of India’s most successful businesses and an organization that has shown extraordinary support for the sport over a number of years, as title sponsors for the 5th edition of Asian Champions Trophy. Hero MotoCorp has been a significant contributor in AHF’s endeavour to promote, grow and professionalize the sport in Asia.”

The 5th edition of the 10-day biennial event titled Hero Asian Champions Trophy Muscat 2018 hosted by Oman Hockey Federation will be one of the first big-ticket hockey event to be played in the vibrant Capital city of Muscat.

AHF Chief Executive Dato’ Tayyab Ikram added: “The association with a global partner and a leading brand of Hero MotoCorp’s stature is a great success that reflects AHF’s efforts over the last two years to take the sport to new echelons in Asia. One of the key reasons to bring the Hero Asian Champions Trophy to Muscat, Oman was to showcase world class hockey players and subsequently also popularize the sport in this region. As host nation, the Oman Hockey Federation has shown immense enthusiasm and are leaving no stone unturned in their preparations. I would specially like to thank the Minister of Sports Affairs Sheikh Sa’ad bin Mohammed bin Said al Mardhouf al Sa’adi for his support. I expect this year’s tournament to be closely fought especially after what we saw at the recently held 18th Asian Games Jakarta-Palembang.”

Introduced in 2011, with the first edition played in Ordos, China, the Asian Champions Trophy is a marquee event in the Asian Hockey Federation’s calendar. The inaugural edition was clinched by India while Pakistan won the title twice in 2012 and 2013 before India could lift the title again in 2016 held in Kuantan, Malaysia. This year’s tournament will witness stiff competition among the top performing teams from across Asia with big stakes at play, especially in the lead-up to the Odisha Hockey Men’s World Cup, Bhubaneswar 2018 slated to begin on November 28, 2018.

India is the top ranked team among the competing teams at 5th position in the latest FIH Hero World Rankings, while Japan, the Asian Games title holders are ranked No.16 in the world. World No.12 Malaysia, World No.13 Pakistan, World No. 14 Korea and a highly inspired Oman team round up an exciting mix of teams promising a fiercely competed tournament ahead.

Oman Hockey Federation, President, Captain Talib bin Khamis Al Wahibi said: “I am extremely happy to be the part of organizing the biggest and one of the most prestigious hockey events in Asia, the Hero Asian Champions Trophy Muscat 2018. I assure Oman Hockey Federation will make all the efforts to stage the event in a spectacular manner. We are hopeful that jointly with AHF, we will be able to present an exciting and successful tournament to the millions of hockey lovers around the world. I wish all the participating teams the very best.”