Hosting the FIFA Under-17 World Cup finals was historic for India. The prestigious championship on the international football calendar has created many historic numbers for the most followed sport the world over.

The 17th edition of the FIFA U-17 World Cup will as much be remembered for the records on and off the field as for India’s hosting abilities.

After the massive turnout in Kolkata on the final day, India edged past China to become the most attended FIFA U-17 tournament ever. The record of 1,230,976 attendance set in the first FIFA U-17 finals edition in China in 1985 has taken 32 years and 16 editions to be bettered. India 2017 is the most attender FIFA Under-17 finals now.

The Indian edition has registered a historic 1,347,143 spectators with 66,684 spectators turning up at the Salt Lake Stadium on the final day. A mere 6,949 attendance was needed to break the record before the final day. 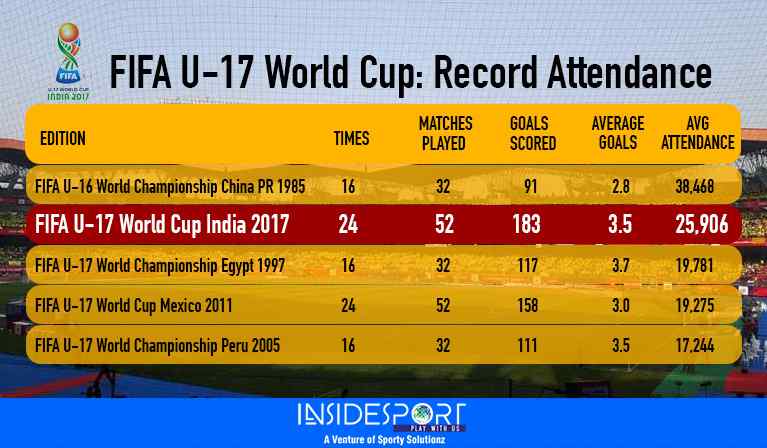 The 2011 edition in Mexico had also attracted a total of 1,002,314 spectators, becoming the third one to have more than one million attendance.

Kolkata’s love for football reciprocated in breaking this record as understandably, Salt Lake Stadium recorded the highest attendance per match. The venue logged a total of 5,42,125 spectators from 10 games, at a staggering average of 54,212 per match.

In terms of the number of spectators per match, this edition is second behind the inaugural edition in China (which was 38,469) as the number of participating teams and matches were lesser then.

Amongst other records, the tournament of 52 matches’ registered record 183 goals at an average of 3.5 goals per match, highest till now for FIFA U-17 tournament. Earlier, the highest ever 172 in a single edition were scored in the UAE 2013 at a rate of 3.31 goals per game.