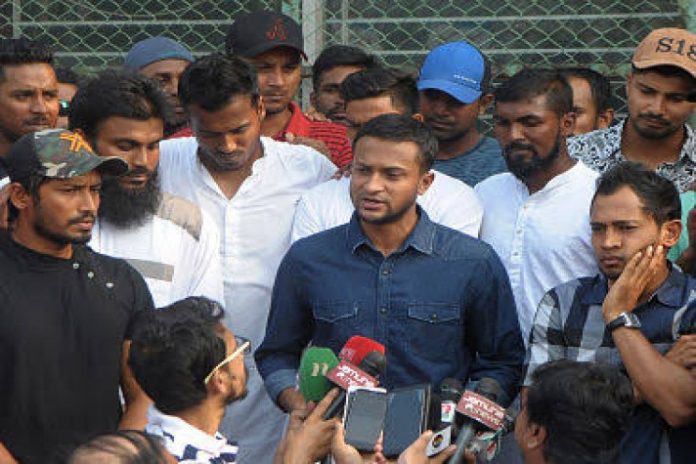 Bangladesh cricketers, led by star all-rounder Shakib Al Hasan, have called off their strike over pay and benefits after getting assurance from the Bangladesh Cricket Board that all their demands will be met, putting their tour of India back on track.

The deadlock between the players and Bangladesh Cricket Board (BCB) ended after a two-hour long meeting which went on close to midnight on Wednesday.

The truce means that the team’s T20 and Test tour of India, beginning November 3, will go on as per schedule and players will be joining the preparatory camp on Friday.

“As Papon bhai (BCB boss Nazmul Hassan) said, it was a fruitful discussion. He and the rest of the directors assured us that our demands will be met as soon as possible. Based on their assurance, we will start playing the NCL and attend the training camp,” ESPNCricinfo has quoted Shakib as saying.

Indian squad for Bangladesh series to be named on Thursday

Shakib attended the meeting along with other senior players including Mushfiqur Rahim, Mahmudullah and Tamim Iqbal.

The players added two more demands to the 11 made on Monday, asking for a percentage of BCB revenues and equal pay for women cricketers.

BCB president Hassan did not commit anything on the two latest demands but said the original 11 will be fulfilled. Players had also demanded fresh elections in the players’ body and BCB agreed to that.

“We told them that there should be CWAB elections (players’ body) swiftly. We want a representative from the current players, so that our problems can be discussed with the board regularly. It will be the best for the players.

“They have agreed, and the elections will be held when we are all available. We can tell you that we are happy when the demands are implemented, but discussions have been satisfying,” said Shakib.

Hassan, who had earlier slammed the players for the timing of the strike calling it a conspiracy, on Wednesday said the Board agreed to most of the cricketers’ demands.

“Among their 11 demands, the first one (CWAB elections) doesn’t have anything to do with the BCB and the last demand (more than two NOCs per year to play franchise tournaments) will be taken case to case.

“We have agreed with the rest of the demands, like the DPL transfers and BPL franchise model. We will also significantly improve their allowances in the domestic competitions, and it will be done in the next two or three days. Not in six months or a year,” said the BCB chief.

Kohli could be rested for T20 series against Bangladesh

On Tuesday night, the BCB agreed to one of the key demands of the players – to bring back the Dhaka Premier League’s club transfer system – following a meeting of the Dhaka league committee.

The players’ other main demands were: Bangladesh Premier League (BPL) must go back to franchise model, central contract salary should be higher, and include more players, higher first class match fees and players’ association to no longer have conflict of interest