IND vs SA LIVE: Dinesh Karthik kept India’s hopes of a series win alive on Friday with a player of the match performance in Rajkot. Returning to the side after a three-year absence, Karthik has made his mark as a designated finisher, winning plaudits for his performances. The 36-year-old is the only cricketer active from India’s first-ever T20I squad, and Hardik Pandya has hailed the RCB star as an inspiration. Follow India vs South Africa Live updates on Insidesport.IN

Dinesh Karthik scored a stunning 27-ball 55, stitching a vital partnership with Hardik Pandya to take India to a competitive total. Karthik has enjoyed a renaissance as a finisher, starring for RCB in the slog overs which earned him a call-up to the Indian team after three years. 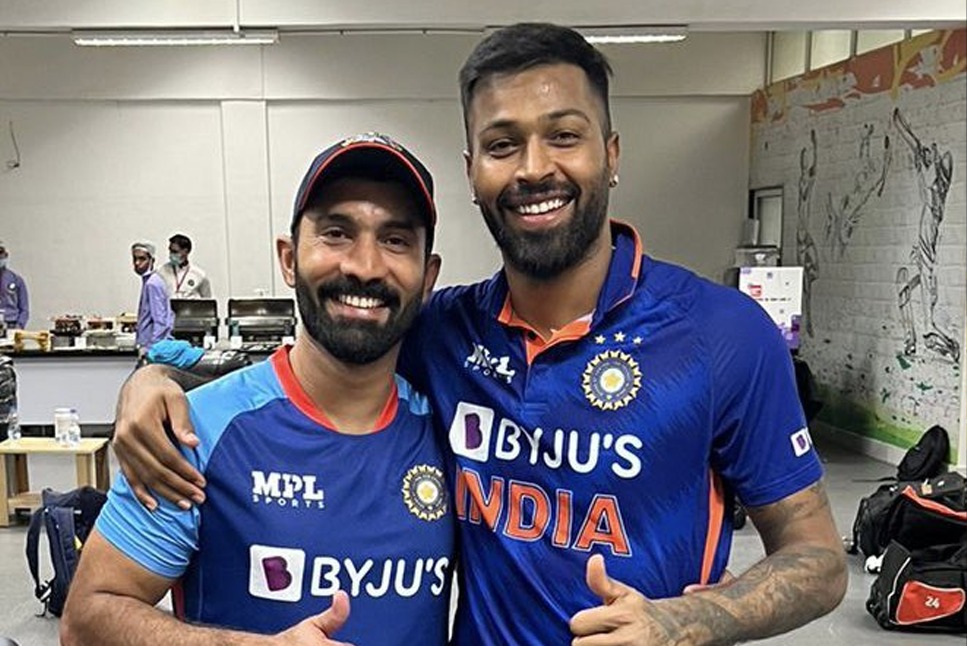 Karthik now in the latter stages of his career has continued to reinvent himself and has over the years made multiple comebacks despite being dropped time and again. When quizzed about his return to the team, the RCB star revealed that he had a single goal of playing the T20 World Cup in Australia later this year.

Hardik who played a supporting role to Karthik on Friday hailed the veteran keeper as an inspiration.

“I need to tell you this, Genuinely I want to tell you this, you have given a lot of inspiration to many guys in their life. I remember the conversation you were having when you were not in the scheme of things, a lot of people counted you out,” Hardik told Dinesh Karthik in a video posted on the official website of BCCI.

In the IPL, Dinesh Karthik had the highest strike rate among all players and was crowned the Super striker of the season. The veteran time and again stitched important partnerships at the end to keep his side in the hunt, which eventually helped them seal a place in the IPL 2022 playoffs.

Karthik meanwhile has already made his mark in international cricket since his return, playing a crucial cameo in the IND vs SA 2nd T20 as well. India were heading towards a mediocre total before Karthik shifted gears and helped India to 149 with a 21-ball 31 not out. The score did not prove to be enough but the RCB star’s ability to chip in in crunch situations.