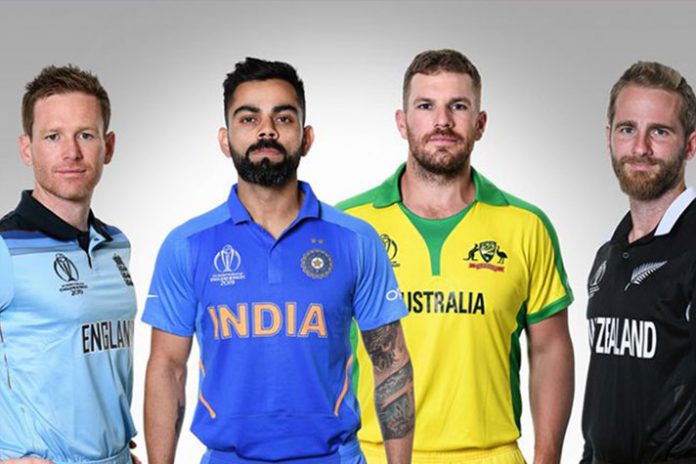 After over five weeks, 45 matches and plenty of standout performances with both the bat and ball, the four semi-finalists for the ICC Men’s Cricket World Cup 2019 have been confirmed.

On the face of it, the top four sides are as expected – with India, Australia England and New Zealand going into the tournament ranked the best four one-day international teams in the world.

But as hosts England can attest to, the journey to reach the knockout stage has not been plain sailing for all sides that remain in contention to be crowned champions. Australia will now continue the defence of their 2015 crown against England at Edgbaston, while India face New Zealand at Old Trafford in the other semi-final showdown.

And as the race to reach the tournament showpiece at Lord’s on 14 July draws to a close, here’s a look at the World Cup records of the four teams who are still in contention for silverware.

#CWC19 Semi-Final and Final tickets, all you need to know!

The tag of being one of the favourites can weigh heavily on some – but India have shown no signs of being burdened by the pressure as they topped the standings after the round-robin stage. The Men in Blue have won seven of their nine games to finish at the summit, with their defeat to tournament hosts England the only blot on their record following a complete washout against New Zealand.

A seventh World Cup semi-final is the reward for their consistency and they will fancy their chances with the likes of skipper Virat Kohli, Rohit Sharma and Jasprit Bumrah at their disposal. You only have to go back to 2015 for the last time India were in the final four, before falling at the penultimate hurdle that year as they were knocked out by eventual champions Australia.

They also exited the tournament at the same stage in 1987 and 1996 – losing to England and Sri Lanka, respectively – in between their World Cup victories in 1983 and 2011. Of the three finals they have contested, though, India have only finished runners-up once. They will also hope the omens are good, having also won their first World Cup on English soil.

Despite arriving in England as the defending champions, Aaron Finch and his men found themselves in the unfamiliar position of not being considered front-runners for the title. With much of the pre-tournament hype focused around hosts England and India, Australia were still seen by many as a side still in transition as they slipped under the radar.

But if the history of the World Cup has taught us anything, it’s that Australia are serial winners and they were the first team to secure their qualification for the knockout stages in the 2019 edition. The five-time World Champions will contest the semi-finals for the eighth time and will do so safe in the knowledge that when they have reached the last four in the past, they have never missed out on the final.

With five World Cup wins from 11 played, including a hat-trick of victories between 1999 and 2007, they unquestionably have the best pedigree of the sides left in the competition. Finch now has the opportunity to join the illustrious names of Allan Border, Steve Waugh, Ricky Ponting and Michael Clarke by leading Australia to World Cup glory. Don’t bet against it.

Coming into the tournament as hosts and the No.1 ODI side in the world, England have had to deal with high expectations in their bid to win their first-ever men’s World Cup. The first objective of reaching the semi-final stages for first time since 1992 has been achieved, though, even if there were a few nerve-shredding moments along the way.

Eoin Morgan’s troops prevailed in their final two games against India and New Zealand to book their final-four place, taking their overall group stage tally to six wins from nine games. And while it has been 27 years since they last contested a World Cup semi-final, England do have plenty of experience of reaching this stage from when the competition was in its infancy.

England progressed to the semi-final stages in the first five editions of the tournament, only to see their challenge go no further in 1975 and 1983 – both times when they were the hosts. But when they have reached the final – in 1979, 1987 and 1992 – England have finished runners-up to West Indies, Australia and Pakistan. This time the hosts will be hoping its fourth time lucky.

The round-robin stage could almost be separated into two sections for New Zealand, who ultimately qualified for the knockout stages with five wins from their nine matches. But that only tells part of the story. The BlackCaps were unbeaten after their opening six matches, with their abandoned game against India at Trent Bridge their only dropped point.

Three defeats from their final three games then left their semi-final place briefly in doubt, only for net run-rate to rescue Kane Williamson’s side with Pakistan breathing down their neck. Like England, New Zealand have never won the World Cup, although they have certainly had their fair share of missed opportunities having previously contested seven semi-finals.

However, of those seven appearances in the final four, the BlackCaps have only gone on to reach the competition’s showpiece once – in 2015 when they were beaten by co-hosts Australia. With the disappointment from that defeat four years ago still fresh in the memory, New Zealand will feel the time has come for them to finally shake off that ‘nearly men’ label once and for all.

Also Read:  ICC World Cup 2019: Who will face India in the semis

ICC World Cup 2019 Semi-Final India vs New Zealand Live Streaming: When and Where to watch Live on TV and Online