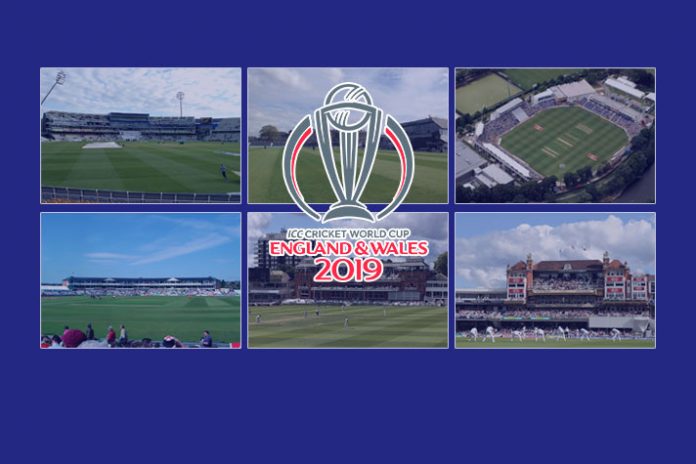 The 12th edition ICC World Cup starts on May 30 when hosts England take on South Africa at the Oval, London. Ten teams will play 46 matches over 45 days across 11 venues spread in England and Wales. Historic Lord’s in London will play host to the World Cup decider on July 14.

London will be the only city to hosts the ICC World Cup 2019 in two stadiums – the Oval and the Lord’s. While the action starts from the Oval, this edition of cricket’s most prestigious competition will culminate at the Lord’s, dubbed the Mecca of Cricket.

Initially there were talks to host several World Cup games at the multi-facility London Stadium. The 60,000-capacity venue at the Queen Elizabeth Olympic Park in the Stratford district of London was built for the 2012 Olympic and Paralympic Games. The multi-purpose stadium thereafter has been better known as Premier League club West Ham United’s home ground.

However, the final call has kept all the ICC World Cup 2019 matches to the traditional cricket venues in England and Wales. InsideSport brings to its readers a brief insight into the 11 stadiums, ready to host the World Cup 2019 across ten cities. 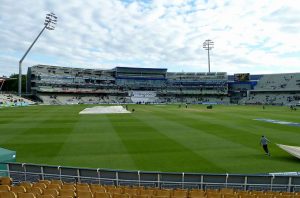 The home ground of Warwickshire County Club, Edgbaston was the first English ground outside the Lord’s to host a major One Day International tournament final when it hosted the ICC Champions Trophy decider in 2013.
Established in 1882, the ground now has a 25,000-capacity cricket stadium. The venue had played host to a Test match in 1902 and hosted the first ODI in 1972.
This World Cup, Edgbaston will host five matches, including a semi-final and India’s league games against hosts England on June 30. India will also be playing Bangladesh here on July 2. 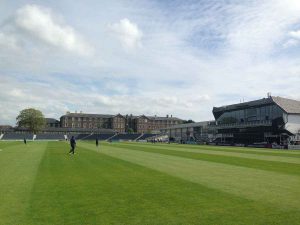 Bought by Sir WG Grace in 1889, the Bristol County Ground (previously Ashley Down Ground) has since been the house of Gloucestershire County Cricket Club. International cricket arrived at the Bristol County Ground as late as in 1983. A regular venue for limited overs cricket, including T20 International, the home of Gloucestershire County Club is yet to host a Test match.

The stadium only has eight thousand seats for County and domestic games. But the facility for the international matches is extended up to 17,500.

The venue will host three matches in the upcoming World Cup. 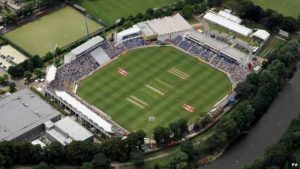 Also known as the Cardiff Wales Stadium, Sophia Gardens is the second smallest of the ICC World Cup 2019 venues with only 15,643 seats. The home of Glamorgan County Cricket Club is also the youngest international venue, which for the first time played host to an ODI in 1999. The Test cricket arrived at this Cardiff Cricket Council property ten years later – in 2009.

The stadium was redeveloped in 2008 at a cost of £9.4 million. Owing to sponsorship obligations, the stadium in June 2015 was named Swalec Stadium.

The venue will play host to the four World Cup 2019 games. 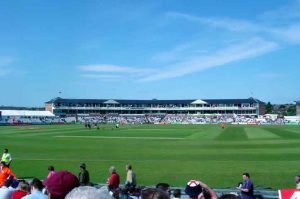 Established in 1995, the Durham County Club home ground is among the latest international cricket venues in England. Christened  Emirates Riverside for sponsorship reasons, the Chester-le-Street stadium is equipped to house up to 5,000 people. The capacity for the international matches is, however, extended up to 19,000 seats.

International cricket at Durham had arrived in 1999 with the Pakistan-Scotland ODI, whereas the England-Zimbabwe match in the 2003 series was the first Test played at the venue.

The ground will host three World Cup games this year. 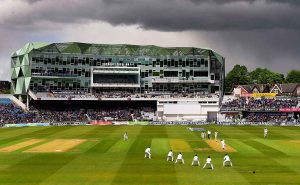 Among the oldest international cricket venues in the world, Leeds has hosted a Test match as early as in the 1899 England-Australia series. The home of Yorkshire County Cricket Club, has been hosting the ODI cricket since 1973, but has not been the venue of a T20I till date.
Prefixed with the sponsor’s identity, the Leeds ground is now called Emerald Headingley Cricket Ground.

The 18,350-seat stadium is scheduled to host 4 World Cup 2019 matches, including India’s league game against Sri Lanka on July 6.

The Mecca of Cricket has a rich history of 205 years, since the venue first played host to a Test match in 1884. Lord’s has been hosting ODI cricket since 1972. The house of Middlesex County Cricket Club can house up to 28,000 spectators.

Lord’s is the home of the MCC Museum, which is the oldest sports museum in the world, and contains the world’s most celebrated collection of cricket memorabilia, including The Ashes urn.

At this very ground, Kapil’s Devils have created history for India by defeating the West Indies in the 1983 World Cup final.

Five World Cup 2019 games at the Lord’s will also include the final on July 14. 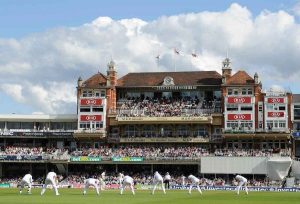 The World Cup 2019 will start on May 30 from this home of the Surrey County Cricket Club. Established in 1845, The Oval is the first ground to host Test cricket in England in 1880 and has been playing host to ODI since 1973. The first T20I at the Kennington, London, stadium was played in May 2014. The final Test match of the English season is traditionally played there.

For sponsorship purposes this historic venue is currently referred as the Kia Oval.

India will play their World Cup 2019 game against Australia at this 25,500-seat stadium.

The second home for the World Cup 2019 games in London will hosts five matches. 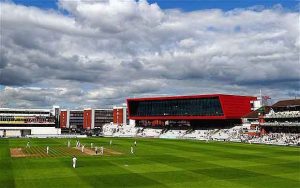 The venue for the mother of all ICC World Cup 2019 battles, the Old Trafford, Manchester, will host the India-Pakistan match on June 16. Among the oldest cricket venues the world over, Old Tafford has been the home of the Lancashire County Cricket Club since 1864 and hosted a Test match way back in 1884. ODI as being played at the Emerald-sponsored venue since 1972.

The ground complex, however, adorns a new look following a 2013 development with a new media and players centre.

Ground’s strength for international games is extended from fixed 19,000 seats to 26,600.

Old Trafford will host the maximum six World Cup games this year, which also include a semi-final. India is also scheduled to play West Indies at the Old Trafford on June 27. 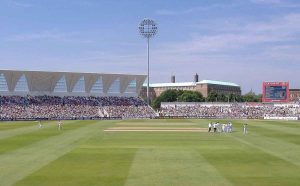 Situated just across the Trent river, the Trent Bridge is the headquarters of the Nottinghamshire County Cricket Club. It has been among the more than a century old cricket grounds in England where Test cricket had arrived as early as in 1899. The ground was though first opened in 1841. Trent Bridge is considered to be one of the best grounds in the world to watch cricket. Trent Bridge’s pavilion, kept within the architectural parameters of its 1889 foundation, is thought of as one of the most renowned trademarks of cricket because it faces the wicket at an angle.

Recent developments include the £7.2 million Radcliffe Road Cricket Centre, opened in 1998 and the state of the art £1.9 million Fox Road stand, which has received awards for its architectural excellence. Commencing in 2007, Trent Bridge has undergone redevelopment with the construction of a new stand to replace the Parr Stand and West Wing and the addition of one to five rows of extra seating at the front of several of the other stands.

The 17,500-seat stadium is scheduled to host five World Cup games, including the India-New Zealand match on June 13. 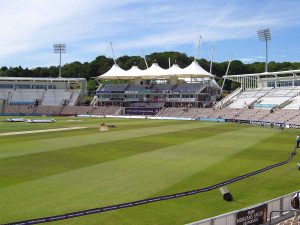 The Ageas Bowl, formerly known as The Rose Bowl for sponsorship reasons, is the youngest stadium to host the World Cup 2019 matches. The home of Hampshire County Cricket Club since it came into existence in 2001, has hosted a Test match for the first time in as late as 2011. ODIs though had arrived here in 2003.

In order to be able to host Test cricket, the ground underwent a redevelopment starting in 2008, which saw the stands built to increase capacity and other construction work undertaken to make the hosting of international cricket at the ground more viable. A four-star Hilton Hotel with an integrated media centre overlooking the ground was opened in 2015. The ground also houses a residential complex. 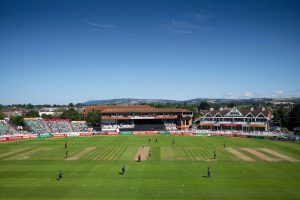 Established in 1882, the County Ground in Taunton had to wait for more than 100 years to get an international match, an ODI during the 1983 World Cup. The home ground of Somerset County Cricket Club is yet to host a Test a match.

The venue with a mere 12,500 seats, extended from the fixed 8,500, will be the smallest stadium to host the World Cup 2019 matches. Alongside Durham, it has also got the minimum three ICC WC 2019 games.