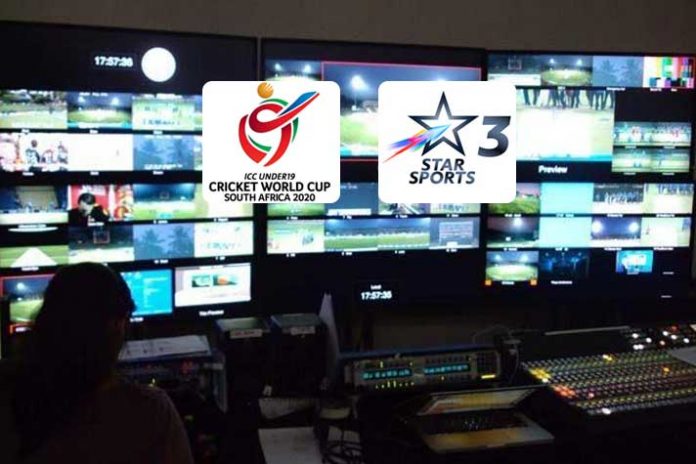 Even as the International Cricket Council has announced an extensive coverage plan for the ICC U19 Cricket World Cup 2020, the host’s broadcaster Star Sports will show the competition on only one channel.

Indian colts will be defending their title in the quadrennial event, starting tomorrow (Friday) across different South African cities. ICC TV will produce live coverage of 20 matches, with short-form digital highlights from every other non-televised match.

The LIVE action in India will exclusively be available on Star Sports 3. The campaign starts with the match between hosts South Africa vs Afghanistan at 1:30 pm tomorrow (Friday).

Local broadcaster, SuperSport, will bring coverage of the tournament to fans in the host country broadcasting all 20 matches across the SuperSport network.

Fans in the Indian Subcontinent (Bangladesh, Bhutan, India, Maldives, Nepal, Pakistan and Sri Lanka) as well as Afghanistan can catch near-live in-match action and post-match highlights via the ICC Facebook page. In addition, post-match highlights and a range of event features, media conferences and archive material will be available to view in over 200 territories on ICC’s Facebook page, as well as the ICC Instagram page.

Elsewhere, in-match digital coverage and post-match highlights of selected matches for fans in the United Kingdom and New Zealand, will be made available by the BBC (United Kingdom) and Spark Sport (New Zealand).

Digital fans can follow the tournament via the official ICC mobile App and website including news, results and highlights for all televised and non-televised games.

The ICC’s official social media channels will bring you closer than ever to the action with content delivered across Facebook and Instagram and fans can join in the discussion by using the hashtags #U19CWC and #futurestars.

ICC TV will produce coverage of 20 of the 48 scheduled matches, led by a strong commentary line-up. Leading coaches from England and Australia, Andy Flower and Tom Moody will be on hand to analyze the performances of future stars from around the world. Former South Africa star JP Duminy will join them on this panel.

Andy Flower: “The ICC U19 Cricket World Cup will draw the most promising players from around the world, creating a wonderful opportunity for us to watch cricket’s future stars in action. This is a great opportunity for the players on the world stage and also a chance to spot their potential and I’m really looking forward to commentating at this exciting tournament.”

Tom Moody: “The best thing about this event is that we get to watch the best young cricketers from around the world. The likes of Virat Kohli, Steve Smith, Kane Williamson, and Kagiso Rabada have all come through the U19s and I am sure there will be many from this tournament who will go on to play top-class cricket. From a personal point of view, it’s a great opportunity to observe new trends in the game plus identify emerging talent.”

JP Duminy: “Having had the great privilege of playing all over the world against some of the best, I’m excited to be on the other side of the microphone sharing my views on our beautiful game. Representing your country is an amazing achievement and the Under-19 level is a great stepping stone for these young men to test their skills and mental capacity against the best in their age group. This event gives us all a great opportunity to see what our next generation has to offer.”

ICC TV’s coverage will be supported by Sunset+Vine for production services and NEP Broadcast Solutions for equipment services. The graphics will be brought alive on the screen by scoring and graphics output specialists Alston Elliot.

ICC TV will provide a fully produced program that will allow broadcasters to transmit the matches without the need for a unilateral presentation set-up. A pre-game build-up show, an innings break show and a post-game wrap-up will be produced by ICC TV, in addition to the match coverage. The build-up will begin 15 minutes before the start of play and include the toss, pitch report and match previews. The innings break programming will also dip into the archives to revisit classic encounters from previous editions of the ICC U19 CWC. The matchday coverage will end with a brief wrap-up of the day’s proceedings.

The feed will also be streamed LIVE on Star’s OTT platform Hotstar.