ICC Player of the Month: New Zealand’s Devon Conway voted player of the month for June after exploits in WTC Final & ENG series

ICC Player of the Month: New Zealand opener Devon Conway and England spinner Sophie Ecclestone have been named the ICC Players of the Month for June. Conway, who announced his arrival in Test cricket with a fantastic double century against England and followed it up with a half-century in the WTC Final against India.

Devon Conway became the first New Zealand player to win the ICC Men’s Player of the Month award after an astounding first month in Test cricket. His solid double century on debut against England at Lord’s helped them eke out a draw and his half-century in the 2nd Test propelled New Zealand to a historic series win in England. He then followed it up with another half-century against India in the inaugural ICC World Test Championship (WTC) Final in Southampton.

This @BLACKCAPS star has been voted the men’s #ICCPOTM for June 🏆 pic.twitter.com/bMVGduhabL

ICC Player of the Month: Conway won the award ahead of team-mate Kyle Jamieson, who was the Player of the Match in the WTC Final against India, with South Africa’s Quinton de Kock the other nominee for his fine performances on their tour of the West Indies.

“I’m truly honoured to win this award. That I have received it for my performances in Test cricket makes it extra special. Scoring a double century at Lord’s was a dream come true for me and to have also been able to contribute to our win over India in the ICC World Test Championship Final is something that I know I will proudly look back on in years to come,” Devon Conway said after winning the award.

“I would like to thank the ICC and New Zealand Cricket for their support and encouragement and look forward to the international cricket to come in the second half of this year,” he added.

ICC Player of the Month: Voting Academy panellist Ramiz Raja on Conway: “His batting on debut at Lord’s ranks as one of the best shows of the year. He plays the ball late, has the patience of a saint, and moves with the smoothness of a warrior. The flavour of the month by a long way!” 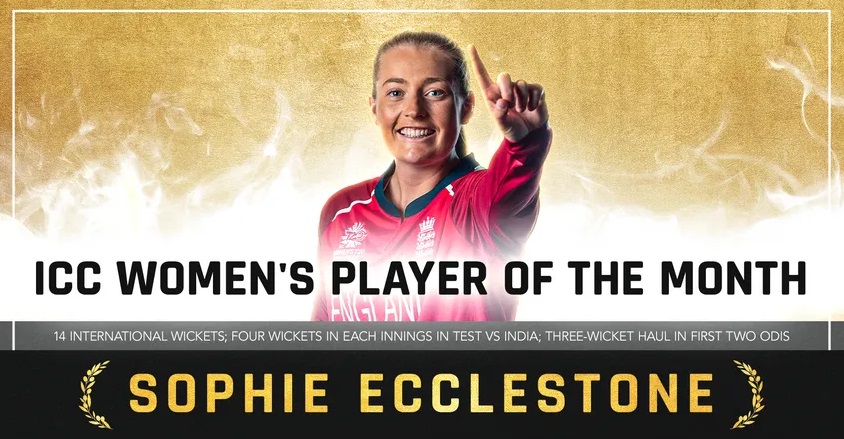 Sophie Ecclestone pips Sneh Rana, Shafali Verma: Left-arm spinner Ecclestone edged out the Indian pair of Shafali Verma and Sneh Rana to become the second English woman to win the ICC Women’s Player of the Month award after Tammy Beaumont, who was crowned in February.

Ecclestone, a winner of the annual ICC Emerging Player of the Year award in 2018, was the most successful bowler in the one-off Test against India in Bristol, where she finished with an eight-wicket haul. She also grabbed three wickets each in the two ODIs which followed.

“It’s really nice to win this award. It’s after a period in which we’ve played all three formats so it feels good to be recognised for my performances in the Test and the white-ball series,” Sophie Ecclestone said.

“We’ve been happy as a team how we’ve performed across this series. We would have liked to have won the Test match but hopefully, we can clinch the multi-format series. It’s all crucial preparation for the ICC Women’s Cricket World Cup in New Zealand when we’ll be defending the title we won in 2017, and we feel in a decent place as a team,” Sophie Ecclestone added.

Big-hitting opener Verma had been nominated for a Player of the Match effort of 96 and 63 on debut in Bristol and some useful runs in the two subsequent ODIs. Rana’s performances during the period included a gritty 80 not out in the second innings to stave off defeat in Bristol and she picked up four wickets as well.

IND vs ENG LIVE: Suspense gets over at 8PM TODAY, Team Management to reveal who will lead India at Edgbaston: Follow Live Updates

“If not BGMI, I might play VALORANT”, Kanishk ‘Slayer’ Shah speaks exclusively to InsideSport

“If not BGMI, I might play VALORANT”, Kanishk ‘Slayer’ Shah speaks exclusively to InsideSport