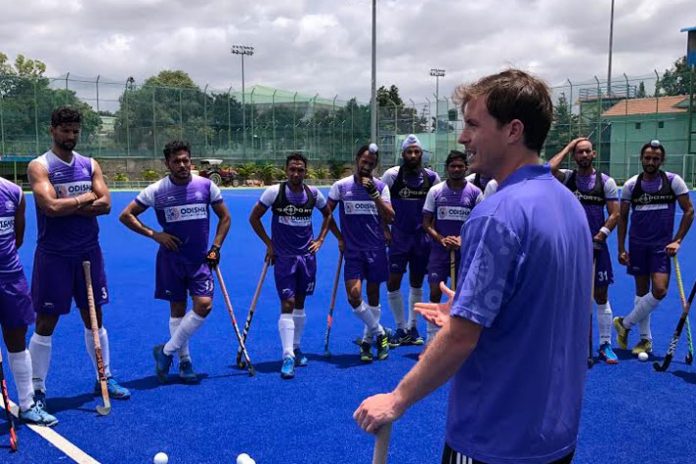 Two-time World Cup winner from Australia Fergus Kavanagh will work with the Indian defenders for seven days during the on-going National Coaching Camp in Bengaluru.

Kavanagh, who was part of the Australian dream team that won the 2010 World Cup in New Delhi and the 2014 World Cup in The Hague and also won the Gold Medal at consecutive FIH Champions Trophy from 2008 to 2012 and won the 2014 Champions Trophy in Bhubaneswar, will be working closely with the 14 shortlisted defenders – Harmanpreet Singh, Varun Kumar, Birendra Lakra, Kothajit Singh Khadangbam, Surendra Kumar, Nilam Sanjeep Xess, Gurinder Singh, Amit Rohidas, Rupinder Pal Singh, Mandeep Mor, Pratap Lakra, Suman Beck and Parampreet Singh, Hockey India has stated in a Press release.

Speaking of this initiative, Chief Coach Graham Reid said, “As a group we are really looking forward to this camp as we get to address some of the ongoing focus points we have identified over the last few months. One of these is of improving our defensive capabilities and we have been lucky to secure the services of former Kookaburra great Fergus Kavanagh. The first week we will be focusing on all aspects of our defence using the unique experience of Fergus’ last 10 years with Australia and more recently with Amsterdam in the Netherlands.”

“Our concentration during the last FIH Series Final in Bhubaneswar was about ‘collective defensive mindset’ which means that defending starts from the front and involves everyone in the team. The whole squad will be in attendance really emphasising this fact.

“The subsequent 4 weeks will be about building a very strong basis of both physical fitness and all-round skills in preparation for our Olympic Qualifier in November. Goalscoring, PC’s, Shootouts and capitalising on our recent Goalkeeping camp will round out the next phase before going to Tokyo for the Olympic Test event in August,” added Reid.