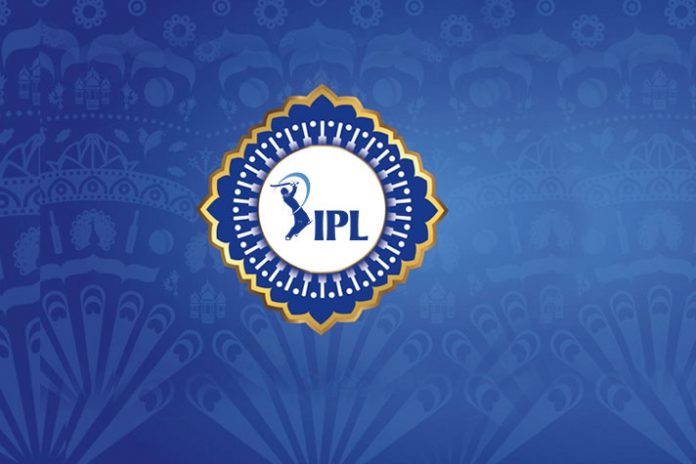 The Indian Premier League sponsorship growth over the 10 years can be an economists delight. A case study for market strategists, media buyers, and economic analysts. Few commercial properties or economic entities would have a potential 1,100% growth rate, the IPL title sponsorship has registered in a span of four deals involving three brands.

A property which the commoners termed as overpriced for realtor DLF’s five-year title sponsorship deal in 2008 at ₹200 crore for a five-year (2008-2012) cycle has reached ₹439.8 crore by 2017. China’s BBK Group smartphone brand, after having paid ₹100 crore per annum for the 2016 and 2017 found the property good enough to make an annual commitment of ₹439.8 crore for the next five seasons. In between DLF and Vivo, Pepsico has been an anti-climax to opt out of its ₹ 79 crores, five-year deal after only three seasons.

The property that has earned ₹616 crore in the first ten years, left the marketers awe-struck as it garnered a value of ₹2,199 crore for the next five years. 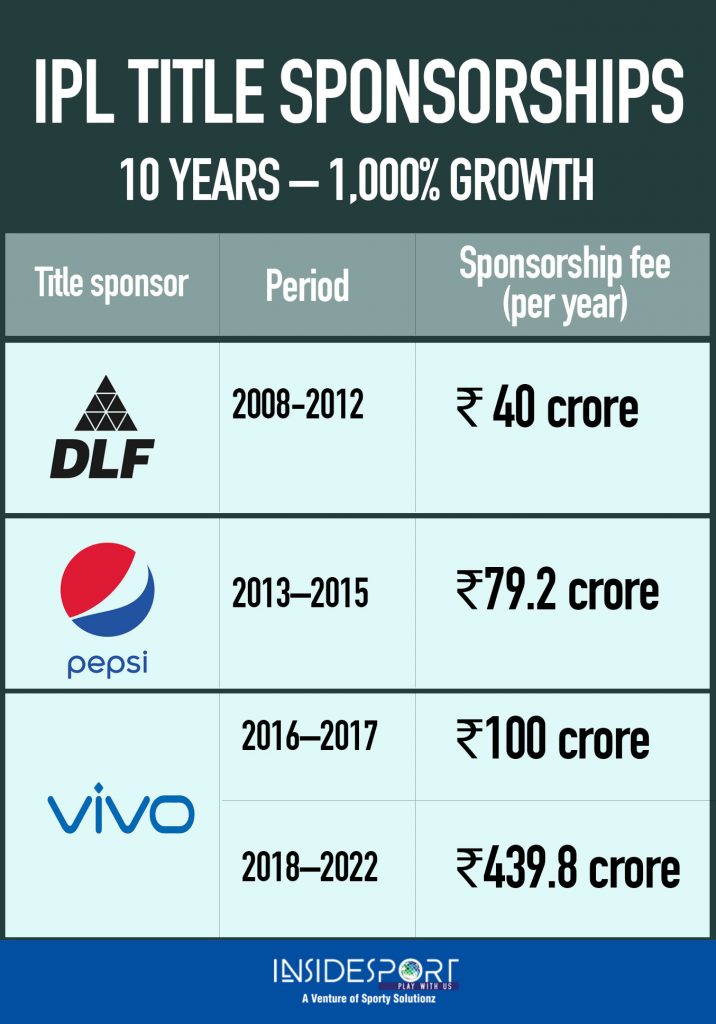 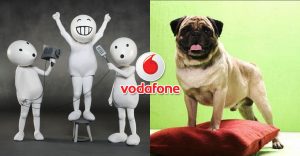 Vodafone will hold the record for longest association with the IPL. The brand that made zoo zoos synonym with the IPL and later followed the league everywhere over the past ten years, however, will face a real challenge to stay on board with the changing dynamics of Indian telecom market and IPL sponsorship economics.

In the formative years, Hero Honda (now Hero MotoCorp) drove the IPL sponsorship market with the then $22.5 million (₹ 90 crores), five-year deal. Beer brand Kingfisher then had come on board as the umpire partner with its surrogate soda ads for $26.5 million (₹106 crore) contract from 2008 to 2012 seasons. Pepsico as official pouring partner ($12.5 m/₹50 crore), Karbonn mobile, Citi Bank and Volkswagon were the other key partners to ride the IPL bandwagon in the formative years. 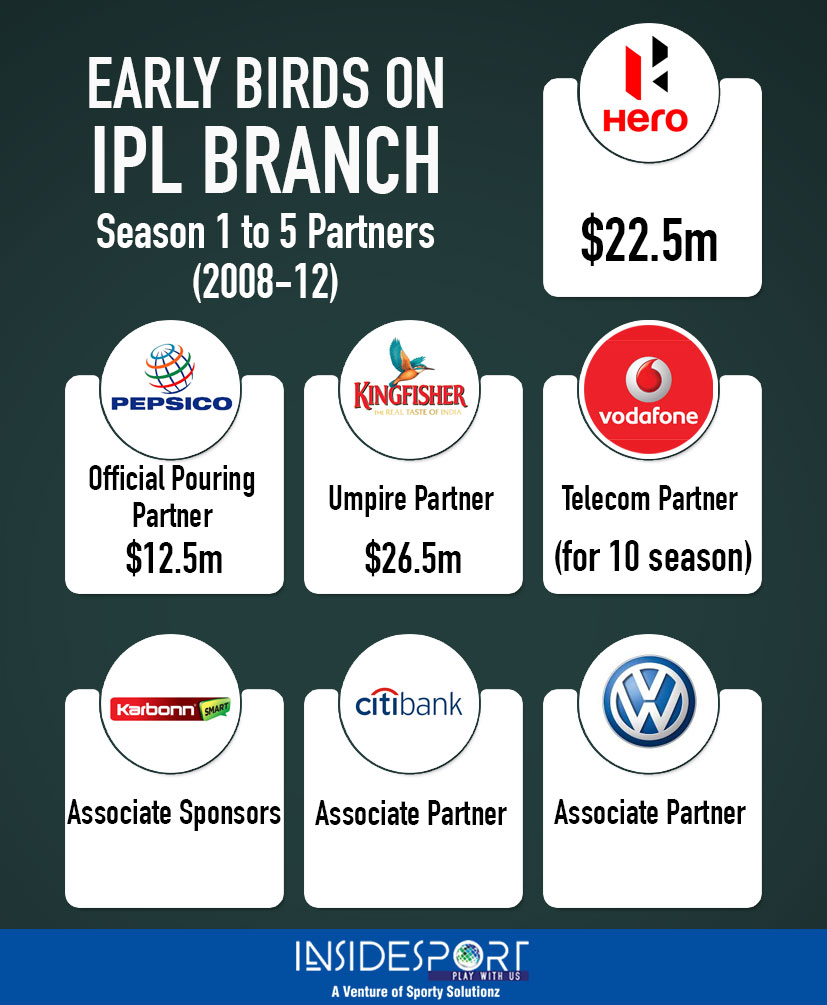 The year of IPL’s mega deals, 2017 has also been the best for the league in terms of total partnerships. The Indian sports most precious commercial property had got 12 commercial partners, including three brands in the premium Presenting Partner category, on board for the tenth season. The other eight were in associate categories. 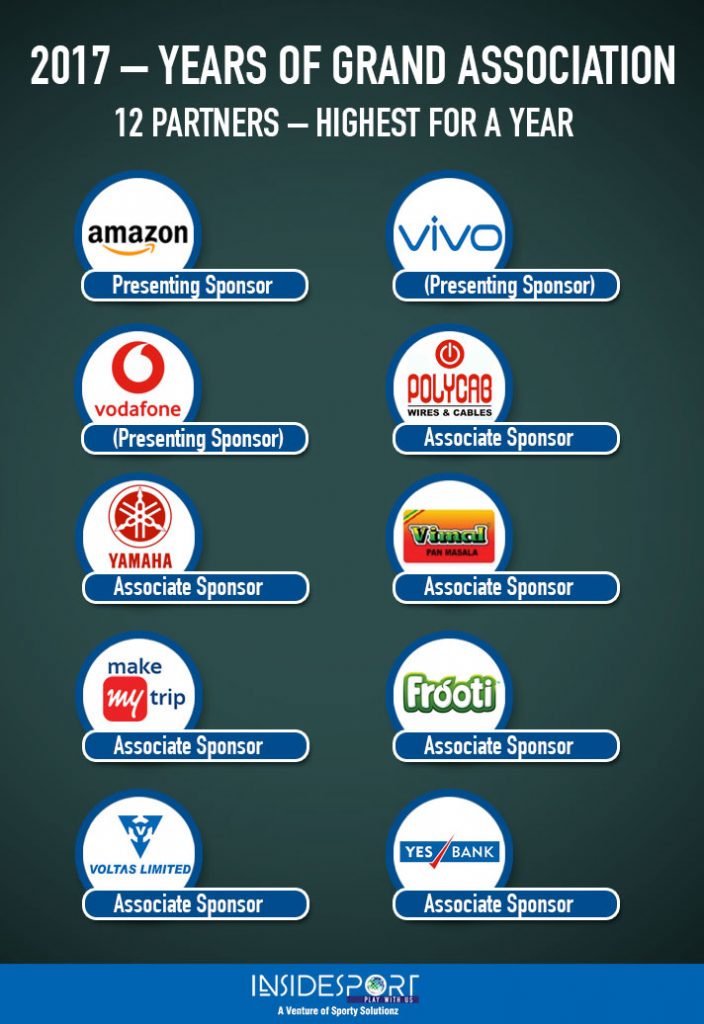 In the intervening phase between 2013 and 2017, Yes Bank, Maruti Suzuki and FreeCharge and Ceat Tyres have inconsistently featured in the Indian sports most consistently growing sports intellectual property.

The BCCI will be awaiting more windfall in an all-new 2018 season, for which Star Sports has set the trend with a ₹16,347.5 crore media rights deal and on-air sponsorship sales pitches with a 100% price hike over what Sony Pictures Network has charged last year.