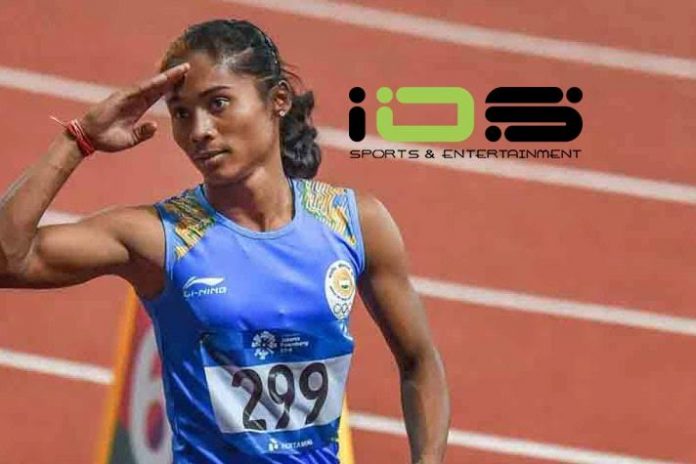 Hard work is reaping rich dividends for Hima Das not just on the track. The fan following on social media and brand value have both doubled ever since she set the track ablaze in Europe from June 2.

Over a span of 20 days, the Assam sprint sensation has emerged as the biggest talking point for Indian sports outside cricket, which of course shared its share of attention over the ICC World Cup, uncertainty over Virat Kohli’s availability for India’s tour of the West Indies and focus on MS Dhoni’s future in international cricket.

Outside cricket, Hima has been the most consistent sports headline. Five gold medals have earned her everything this 19-year-old Dhing Express would aspire for.

Hima’s brand endorsement fee in the past fortnight has doubled from ₹ 30 lakh to ₹ 60 lakh with an enhanced brand interest to associate with the champion, her exclusive brand representation firm iOS Sports and Entertainment has confirmed to InsideSport.co.

“Hima’s endorsement fee is up from ₹ 30 lakh to ₹ 60 lakh following her consistent rum over the past three weeks,” IOS Managing Director Neerav Tomar has said.

Praise is showered on the champion from all quarters – ranging from the President and the Prime Minister to Indian film fraternity to her sporting hero Sachin Tendulkar. The batting maestro called Hima in Europe. During the 15-minute call, one of India’s biggest sports icons Sachin wished and thanked her for bringing laurels to the country.

India is very proud of @HimaDas8’s phenomenal achievements over the last few days. Everyone is absolutely delighted that she has brought home five medals in various tournaments. Congratulations to her and best wishes for her future endeavours.

Tendulkar had also hosted Hima shortly after her Asian Games success last year, when the teen sensation aspired to meet her sporting hero. In that meeting, Sachin had also presented her with his autographed jersey, which he had worn in the match before his retirement.

Loving the way you have been running in the European circuit over the last 19 days.
Your hunger to win and perseverance is an inspiration for the youth.
Congrats on your 5 ? Medals!
All the best for the future races, @HimaDas8. pic.twitter.com/kaVdsB1AjZ

Athletics Federation of India also needs to be credited for Hima’s dream run on the track. She is going to stay in Europe as part of her training programme planned and funded by the federation.