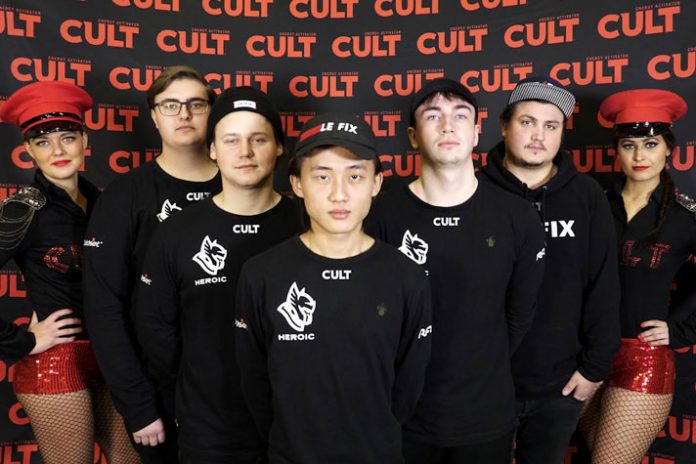 Heroic and their compatriot energy drink brand in a media release have described the association as a union of the brands made for each other.

“By now most people have seen that esports is growing fast also outside the hardcore fan scene. Being the main producer of energy drinks, in CULT we have been looking for an optimal partner for a strategic partnership in a business that matches our target audience, growth, and values. We have been in discussions with Heroic and RFRSH Entertainment for a while, and I am in no doubt, we have found the perfect match. The team and the organization share basically all our values when it comes to passion, drive, playing to win and the courage to do, what others don’t,” said Brian Sørensen, Founder, CULT.

“Being the first amongst the challengers in the market is a position that gives us space to act and push the borders. We love beating the ”big ones” and I know we share that feeling with the Heroic guys, who beat the World’s number one last year, and who as a team and as individual players hunger to do it again and Again. We both want results, and I look much forward to launching our co-operation with Heroic over the coming months. In many ways, RFRSH Entertainment has already made a huge impact on the esports scene and I am sure that CULT, together with RFRSH and Heroic, will be able to surprise quite a few people over the duration of our partnership,” Sørensen added.

“As a brand and as a team, Heroic holds a huge potential for growth. At present they’re sub-top on the world rankings, but they have the skills to surprise even the best teams out there, and to become a strong contender for top 10. We always strive to work with Commercial partners with the desire and ability to contribute to the esports scene in a positive fashion and who have the ambitions to change the perception of esports. In this connection, we’re proud to team up with an organization like CULT,” Jakob Lund Kristensen, Co-Founder, RFRSH Entertainment said.

“Performance is about a range of aspects including passion, dedication and the courage to think and do the unexpected. CULT is well known in Denmark to ”challenge normal” and on top of being a very lucrative deal CULT is known to involve itself deeply in the brands and products they work with. This will become obvious as we go along and the co-operation will be rolled out, and we’re all excited about what the future holds for this set-up,” Kristensen added.

Besides a key position on Heroic’s jersey and all digital platforms, the partnership includes a co-operation on the product side to be announced at a later stage. Economically the deal is described as “substantial” without further details.

Heroic is a newly founded and player-owned Counter-Strike: Global Offensive team, that competes among the very best globally. Created upon a solid pillar of friendship and dedication to the game, you can follow our quest to cement ourselves among the greatest teams in the world.