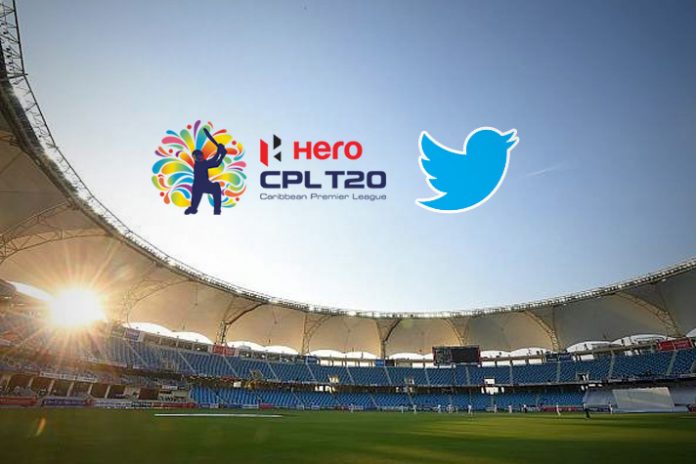 The Hero Caribbean Premier League (@CPL) and Twitter have announced a collaboration to live stream all matches of the 2018 season in 54 countries.

The deal marks the first occasion for a live streaming of a professional T20 league on Twitter. Cricket fans in the 54 will be able to watch full matches on Twitter and join in the live conversation at the same time. Fans in India will also be able to enjoy over 150 highlight video clips from the league, courtesy of an in-stream video sponsorship collaboration with the Hero Caribbean Premier League (@CPL) and Hero MotoCorp (@HeroMotoCorp), the world’s largest two-wheeler manufacturer.

?All Hero #CPL18 matches will be streaming LIVE on Twitter across 54 countries!?Fans anywhere in the world can watch @CPL highlights here. All thanks to our title sponsor @HeroMotoCorp signing a Video Sponsorship on Twitter for the second year in a row! pic.twitter.com/Sg72fv6RRa

The 2018 edition of the Hero CPL will feature superstars from around the cricketing world including Chris Gayle (@HenryGayle), Andre Russell (@Russell12A), Steve Smith (@stevesmith49), David Warner (@davidwarner31), Kieron Pollard (@KieronPollard55), Dwayne Bravo (@DJBravo47), Sunil Narine (@SunilPNarine74), David Miller (@DavidMillerSA12) and many more. The live stream of CPL matches will be available to logged-in and logged-out cricket fans on Twitter and connected devices via @CPL on Twitter.

Twitter’s in-stream video sponsorship enables publishers like Hero Caribbean Premier League (@CPL) to monetize video content while making it easy for advertisers such as Hero MotoCorp (@HeroMotoCorp) to reach engaged audiences and sponsor exclusive content. Through the partnership, premium video content highlights from #CPL18 will be made available on Twitter in India and globally. The in-stream video sponsorship collaboration builds on the success of the last season and treats fans on Twitter to the best moments from#CPL18.

Bharatendu Kabi (@bharatendukabi), Head, Corporate Communication, Hero MotoCorp, said, “We are delighted to extend our association with Twitter for the second consecutive year, for the Hero Caribbean Premier League. Cricket fans in India and around the world now prefer to watch live streams of their favourite matches at their convenience and we are glad to play a key role in facilitating this. Twitter is today one of the most preferred media for the youth and our continued partnership with them is a signal of Hero’s commitment to bringing sports to where the fans are.”

“Hero CPL is the biggest party in sport and we’re proud to partner with Twitter to become the first T20 cricket league to give fans access to cricket streaming LIVE on the platform. Hero CPL brings together some of the biggest cricket superstars in a carnival atmosphere. In addition to the games, the highlight clips on Twitter thanks to our title sponsor Hero will ensure that fans don’t miss a single moment, just like Fabian Allen’s stunning catch last season. Our goal is to engage the cricket community even more deeply and this partnership will make it big, especially as our star players are popular on Twitter.” said Vishnu Kumar (@vishkmar), Head of Digital, Hero CPL.

Commenting on this partnership, Aneesh Madani (@aneeshmadani), Head of Sports Partnerships, Asia Pacific, Twitter said,“The global, public conversation around cricket happens on Twitter and we’re thrilled to team up with Hero CPL to add LIVE-streamed cricket to that experience for fans in 54 countries. Strengthening our partnership with Hero CPL is the in-stream video sponsorship with Hero for the second year running. Together, we’re excited to offer cricket fans a unique experience to take in the games, highlight video clips and the conversation, all in one place on Twitter.”

Since, Star India-owned OTT Platform holds the Hero CPL T20 streaming rights for India, the Indians cricket fans will only get to see the select highlight video clips on twitter. They though can access the live action on designated Star Sports channels and Hotstar.