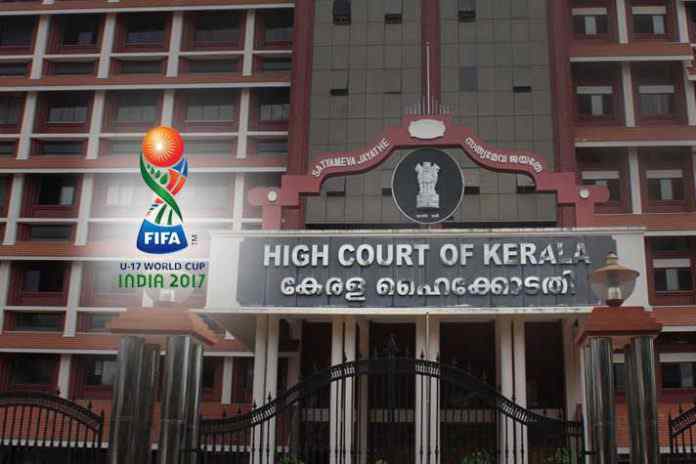 The Kerala High Court has posted for further hearing on Tuesday a plea by business establishments challenging a notice issued by GCDA directing that the units inside the Kochi Jawaharlal Nehru International stadium complex be closed for a specific period for smooth conduct of the FIFA U-17 World Cup football tournament in October.

The petition sought adequate compensation in case their establishments are shut. Justice K Vinod Chandran while accepting the application has posted it for Tuesday for further consideration, reports PTI.

FIFA had warned earlier that if the Kochi Stadium premises were not fully vacated and handed over to the organizing committee for the U-17 World Cup, the world governing body for football would consider the shift the Kochi venue to some other place.

The business establishments have pleaded that the closure of the units will cause them heavy financial liabilities. If the Greater Cochin Development Authority (GCDA) is bent on implementing the direction, they should be adequately compensated, the petition said.

The GCDA, which owns the stadium, submitted that it was in fact only a temporary suspension of the right of the tenants to use the premises. “This is done only with a view to enable the smooth conduct of the international sports event (FIFA U-17 World Cup). The government and the GCDA is legally bound to ensure that the vacant possession of the premises is given to the FIFA for enabling the smooth conduct of the international championship,” GCDA said in a written statement filed before the court.

It said any delay in the physical handing over of possession to FIFA may imperil the actual conduct of the event itself. It also argued that the terms of the agreement with the petitioners clearly enable such an action. The GCDA said more than 50,000 people are likely to assemble in the stadium to watch the football matches.

“It is the responsibility of the district administration to ensure the safety and the security of its spectators, officials and players from various countries participating in the international event. Functioning of shops/offices within the Jawaharlal Nehru International (JNI) stadium complex can cause hindrances to safety and the security arrangements to be facilitated,” the GCDA statement said.

It also said several hazardous materials are handled and stored in shops/offices within the stadium complex where matches are scheduled to be held during October. “It is submitted that decision to close down the shop rooms are issued in larger public interest and the difficulties faced by the petitioners cannot outweigh the larger public interest,” it said.

The local organising committee of the FIFA U-17 tournament said this was a matter between GCDA and the individuals concerned, but expressed hope that a suitable resolution for both parties could be arrived at. “We have a contract with GCDA regulating the use of the JNI stadium for the FIFA U-17 World Cup tournament and we have been given assurances by the Kerala state government that all contractual commitments and obligations will be respected,” it said in a statement here.