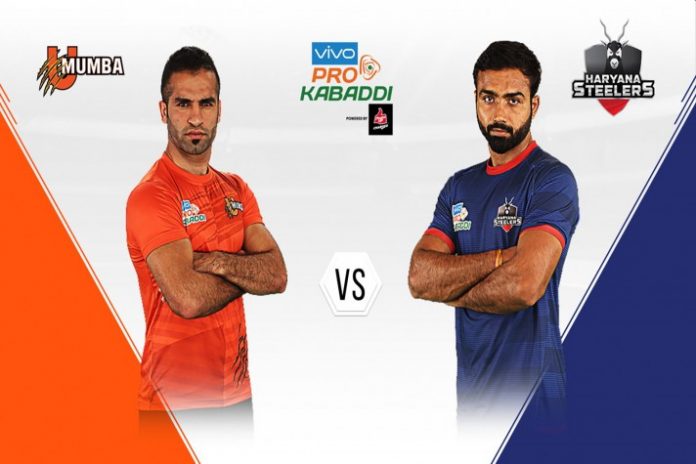 Haryana Steelers fought hard against U Mumba before going down 33-39 in the Pro Kabaddi League on Thursday.

Kuldeep Singh and Sunil set the ball rolling for the Haryana Steelers with a couple of tackle points in the opening minutes of the match. Vinay pulled off a fantastic raid in the 4th minute to help Haryana take the lead at 4-3. However, U Mumba picked up some crucial raid and tackle points and took a three-point lead at 9-6 in the 11th minute.

The Haryana Steelers fought back through raid points by Vinay and Naveen as they leveled the match at 9-9. Thereafter, both sides played aggressively and kept scoring points in tandem. U Mumba were leading at 15-14 in the dying minutes of the first half, but Ravi Kumar carried out an excellent tackle just before the whistle.

PKL 2019: Haryana Steelers vs Jaipur Pink Panthers and Bengal Warriors vs U Mumba…

Vikash Kandola got Haryana off to a great start in the second half with a fantastic raid in the 21st minute. Kuldeep helped Haryana take a four-point lead when he carried out an all-out in the 22nd minute. However, U Mumba fought back and took the lead after pulling off an all-out in the 28th minute.

The Haryana Steelers played their heart out and tried to stay in the contest, but U Mumba kept extending their lead. Vinay recorded a Super 10 in the 32nd minute, but U Mumba still led by four points at 32-28.

Sunil scored a tackle point in the 33rd minute and Vinay recorded a raid point in the next minute. However, U Mumba kept inching ahead.

Haryana almost caught up with their opponents through raid points by Kandola in the last few minutes of the match, but U Mumba maintained their lead and eventually clinched a victory.