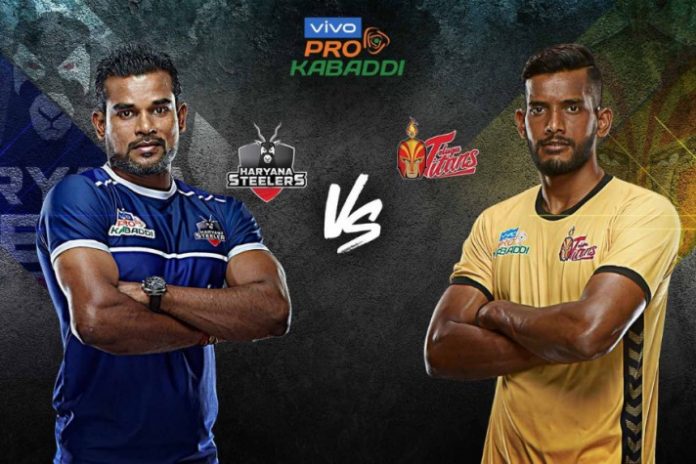 Vikas Kandola was once again the star for Haryana Steelers as he helped his side finished off their Pro Kabaddi League home leg with a thumping 52-32 victory over Telugu Titans on Friday.

Vikas Kandola scored 13 raid points and Ravi Kumar picked up seven tackle points as Haryana dominated the match right from the first whistle till the end in front of a packed audience at the Tau Devi Lal Sports Complex here.

The match started with both teams opting for an aggressive approach.

The home side opened a lead towards the 10th-minute mark thanks to Vikas Kanadola and Vinay contributing through multi-point raids. Haryana sealed their first All-Out in the 11th minute to open up a 4-point advantage.

After the All-Out, the Steelers took control of the match with Vikas Kandola impressing with his raids. The raider moved to nine raid points as the Haryana side inflicted another All-Out with less than three minutes remaining in the first half to open a 16-point lead.

The first half ended 30-12 with Steelers on top.

The home side were in no mood of giving up their momentum in the second half and Vikas Kandola, who secured his Super 10, inspired another All-Out on Titans in the fourth minute to open up a 24-point lead.

The trend continued, despite Siddharth Desai picking up a Super 10 for the Titans, as Haryana maintained a healthy lead. Ravi Kumar and Sunil were having a good day on the mat for the Steelers as they dominated the final minutes that also saw Thailand captain Tin Phonchoo make a cameo experience for the Steelers.

The result will soothe the hurt ego of the Steelers who were battered by the Bengaluru Bulls and Pawan Sehrawat in their previous encounter.