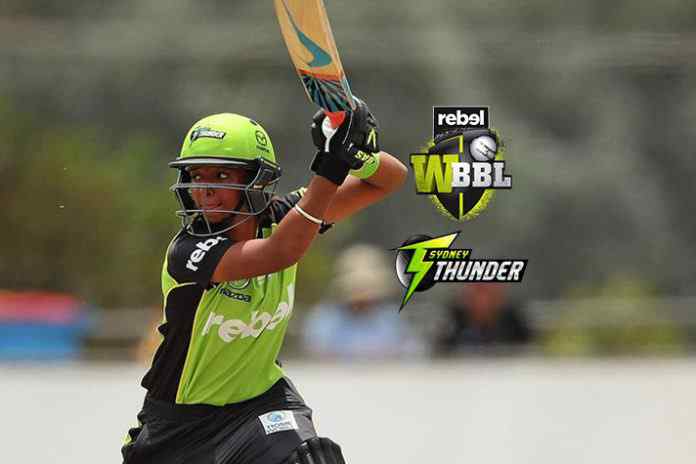 India’s T20 captain Harmanpreet Kaur has extended her association with Sydney Thunder in Australia’s Women’s Big Bash League by two years. Kaur’s contract was extended further on the final day of the tournament’s contracting period for the third edition, which starts from December 9.

Last season, Kaur became the first Indian women player to feature in an overseas T20 league, scoring 296 runs for the Thunder at an average of 59.2 and a strike rate of 117 – the second-highest run-getter for the side – while her offspin yielded six wickets, including a four-for against the Melbourne Stars. She was adjudged the Sydney Thunder’s Player of the Tournament for her stellar performances, even though the side failed to make the playoffs.

She was in the headlines again because of her stunning performance during the World Cup qualifiers and then the World Cup by steering India to the final – where they lost to England. She scored a smashing unbeaten 171 runs from 115 balls during the semi-finals – the highest score in the tournament’s knockout stages.

Sydney Thunder’s general manager Lee Germon, excited over Harmanpreet’s contract extension, said: “Following the Women’s World Cup, Harmanpreet was the hottest property in cricket,” Germon said. “She showed during that tournament, and through her performances with the Thunder, that she is one of, if not the most, destructive batters in the game at the moment.”

Thunder coach Jo Broadbent spoke about the value Harmanpreet brought to the side. “She’s a match-winner and that’s what you need in T20, you need those match-winners,” Broadbent told adelaidenow.com.au. “She’s got that really good blend of technique and power, she really works on the basics. She’s just incredible and such a great person to have. Her bat does most of the talking.

“Normally in the women’s (T20) game if you get your run rate up to eight runs an over, you rarely see players explode and get over 10 runs an over and do that for four or five overs. She can do that. If we had to get 10 or 12 runs an over and she was in the middle, you’d almost be backing her to win a game.”

Harmanpreet’s signing comes more than a week after New Zealand wicketkeeper-batsman Rachel Priest’s move to the Thunder from the Melbourne Renegades. The side, however, still have to confirm two members of their 15-member squad for the third edition before the deadline.