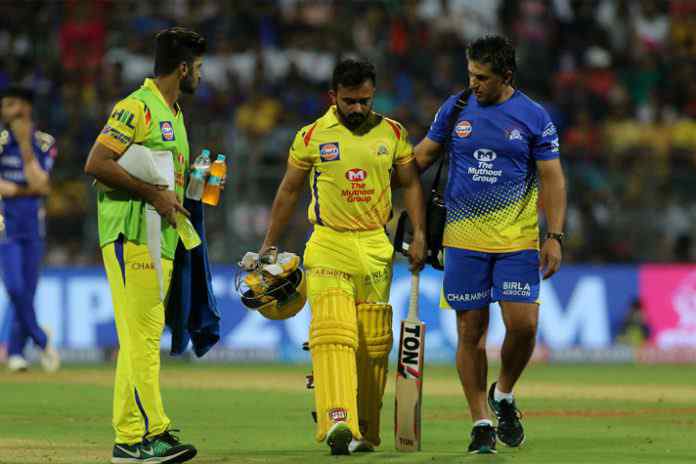 Kedar Jadhav, The man who had limped on to the field to propel Chennai Super Kings to a thrilling win over hosts Mumbai Indians at the Wankhede Stadium on Saturday, is out of the Indian Premier League 2018 for the rest of the season.

Jadhav had sustained a grade-2 hamstring tear in the IPL season opener against Mumbai. He will be out of action for the rest of the season.

Chennai Super Kings are yet to pick a replacement for Jadhav. “We haven’t picked a replacement as yet but we will go through that process,” CSK batting coach has said in Kolkata on Monday. The Mahendra Singh Dhoni-led Super Kings will take on hosts Kolkata Knight Riders tomorrow (Tuesday).

Jadhav’s exit is a big blow the Yellow Brigade. The all-rounder, ranked 78th in the MONEYBALL IPL salary rankings, had been acquired by the Chennai Super Kings for ₹7.8 crore at the IPL player auction in January this year.

“It (Jadhav’s injury) is a big loss for us because he is obviously a very, very good player and a key player for us in the middle order. So big shoes to fill for a little man I guess,” the Batting coach said ahead of Tuesday’s clash against Kolkata Knight Riders at MA Chidambaram Stadium.

CSK also has another injury scare for the game against the KKR. Faf du Plessis is recovering from a side strain and might not take to field on Tuesday. “I believe Faf is not in full training at the moment. He’s recovering from a slight side strain and obviously he’s got a small fracture in one of his fingers. But he’s going to be ramping his training up a lot in the next seven days and is hopeful to be available for the next tie against Punjab,” Hussy said.

CSK had also not named a replacement for Mitchell Santner, who was ruled out for an injury before the tournament start.