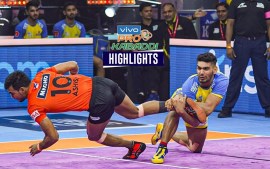 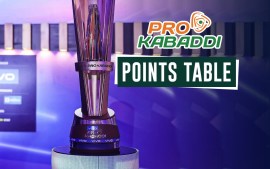 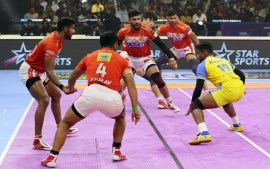 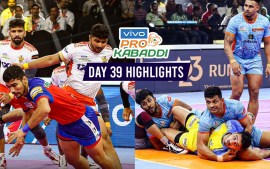 Gujarat Giants vs Bengaluru Bulls Highlights: Bharat’s unbelievable raiding which resulted in a total tally of 18 points, helped Bengaluru Bulls ease to a 45-38 win over Gujarat Giants in vivo Pro Kabaddi Season 9 at the Gachibowli Indoor Stadium in Hyderabad in the last game of Friday. Follow Pro Kabaddi League 2022 LIVE updates on InsideSport.IN

A high-speed, high-points game kicked off with the Bulls firing on all cylinders right from the word go. Bharat, on his first raid of the evening — and in fact the evening’s fourth raid — got a Super Raid taking out the Giants’ Rinku Narwal, Rakesh and Manuj to leave them reeling and staring at an early All-Out. The All-Out duly came soon after, as the Bulls surged into a 9-3 lead.

To the Giants’ credit, they did not take the shock lying down and were soon in the hunt themselves. Parteek Dhaiya and Chandran Ranjit’s success soon helped them inflict an All-Out of their own to draw level at 11-11. But the pendulum swung again, and the Bulls went on to get their second All-Out of the game to again run into a 20-13 lead. Bharat had by then registered a Super 10 already. Despite a late Giants fightback, the teams went into halftime with the Bulls leading 26-22.

The pace of the game dropped in the second period, but the quality remained high. While Bharat’s constant success when raiding ensured the Bulls never lost the lead, they were never truly out of sight either.

It all changed at the halfway mark of the second period. On a Do-or-Die raid, Bharat took out Shankar Gadai, Chandran Ranjit and Rinku Narwal in a Super Raid that set up another All-Out. Mayur Kadam’s tackle on Sonu then gave the Bulls their third All-Out of the game to move into a nine-point lead.

While Bharat and the Bulls’ raiders took much of the applause, their quartet of defenders was also responsible for what ended up being a straightforward victory. Between them, Mayur Kadam, Mahender Singh, Saurabh Nandal and Aman scored plenty of points and kept the Giants’ Ranjit and Dhaiya at bay to ensure their team got the win.