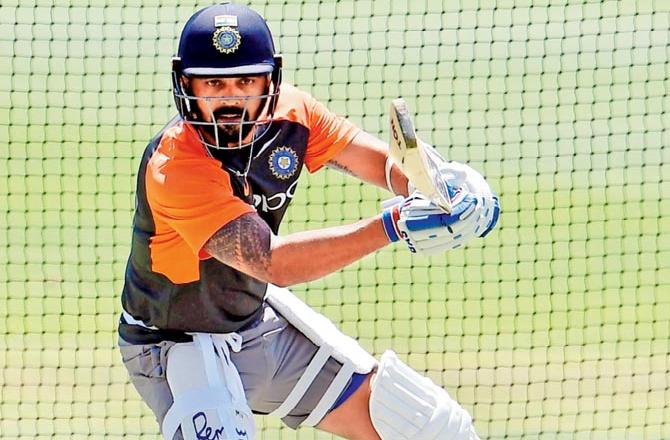 Most Indian teams of the past would be wary of a green top but the Virat Kohli-led side will see it as an opportunity to bulldoze the Australians when the second Test begins on a pitch offering plenty of pace and bounce at the brand new Optus Stadium, here Friday.

The mood in the Indian camp was summed up best by the skipper after a green pitch was unveiled on eve of the maiden Test at the new facility. “We get more excited than nervous looking at lively pitches now,” said Kohli, who has a potent pace attack at his disposal.

Curator Brett Sipthorpe is trying to produce the ‘bounciest’ pitch he can and that could very well work in India’s favour as the visitors aim to take a 2-0 lead in the four-Test series,

India won the first Test in Adelaide by 31 runs.

Keeping with tradition at the good old WACA, a raging quick wicket has been laid for this inaugural five-day game. It has a healthy layering of grass which could impact strategies for both sides.

The visitors will surely name a changed eleven as they have been hit by a couple more injuries. India named their 13-man squad for this second Test, with R Aswhin and Rohit Sharma the two notable absentees. Ashwin is ruled out owing to a left-abdominal strain while Rohit is laid low due to a back issue that he sustained whilst fielding in the first Test at Adelaide.

The batsman missed out on both days of practice leading to the second Test. Ashwin also skipped the optional training on Wednesday, and while he was present for warm-ups during Thursday practice, he didn’t bat or bowl in the nets. Meanwhile, Prithvi Shaw continues to be ruled out, meaning India will retain their opening combination of KL Rahul and Murali Vijay.

For the other two spots in the playing eleven, Hanuma Vihari, Ravindra Jadeja, Bhuvneshwar Kumar and Umesh Yadav have been included in the 13-man squad. It gives rise to different permutations and combinations, and Kohli does have prior history of picking an all-pace attack earlier in 2018.

At Johannesburg, on another raging green-top wicket, he picked a four-pacer attack with Hardik Pandya as the all-rounder.

India also have played an all-pace attack in Perth back in 2012, when MS Dhoni fielded Zaheer Khan, Umesh Yadav, Ishant Sharma and R Vinay Kumar at the WACA Ground. Virender Sehwag bowled 7.2 overs of off-spin in that Test, and it provides a template for Kohli to follow.

With Rohit out injured, Vihari is likely to play his second Test after his maiden appearance at the Oval, wherein he scored 56 runs in the fifth Test against England.

Vihari is a handy off-spinner as well, and the team management hasn’t been shy to use him as such. At the Oval, when India did play with four full-time bowlers, he bowled 10.3 overs.

In the practice game in Sydney too, Vihari bowled 12 overs against Cricket Australia XI. Along with Vijay, picking Vihari allows the Indian think-tank to go in with a four-pacer strategy, with Bhuvneshwar Kumar coming in for the injured Ashwin.

Even so, recent records need to be considered. In November, Western Australia hosted New South Wales for a Sheffield Shield game at this new ground as a dry-run for this maiden Test.

Clearly, Lyon as the off-spinner was able to exploit the bounce on offer. If Ashwin had been available, Kohli perhaps would have still been tempted to play him. With Jadeja in the squad though, there is still possibility to go in with a spinner albeit the temptation is greatly reduced.

The Indian batting line-up should otherwise be unchanged. On Thursday, the three Indian pacers, who played in Adelaide, didn’t bowl at all. They did pad up and have a hit in the nets.

Australia could make a tactical change to their batting line-up as well. Aaron Finch has come under sharp criticism for his shot selection in the first Test and there are growing concerns about him going into this match.

After Wednesday’s practice sessions, there was growing opinion that either Usman Khawaja or Shaun Marsh could open in his place, with Finch slotting down in the middle order.

All-rounder Mitchell Marsh still only has an outside chance to play in this Test with skipper Tim Paine declaring himself fully fit after being hurt on his right hand in Adelaide. Australia are expected to field the same bowling line-up and barring any surprising injuries, Peter Siddle is not in consideration.