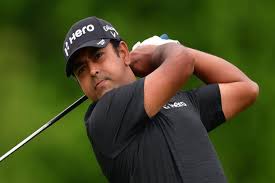 Indian golfer Anirban Lahiri kept his card clear of bogeys for the second day running as he returned a five-under 67, which included an eagle on the 18th, to be Tied-33rd after the third round of the Safeway Open here.

The performance took Lahiri to 10-under for 54 holes in a low scoring event, where Brian Stuard finished with a scrambling birdie for a six-under 66 and a share of the lead with James Hahn (67) and Cameron Percy (68).

Lahiri, whose last bogey came on his ninth hole in the first round, where he started from the 10th, has now played 45 holes without a bogey. He hit 15 of the 18 greens in regulation during his third round.

Lahiri started the day with a string of four pars, before reaching the green in two and two-putting from 69 feet for a birdie on par-five fifth.

He continued to be steady and had a birdie chance on the seventh, when his 15-foot attempt slipped past two inches. But on the ninth, he holed a 10-footer to turn in two-under.

An excellent approach from 134 yards saw him land his second shot less than two feet for a third birdie.

On 17th, he had a birdie chance from 13 feet but two-putted. Finally on the Par-five 18th, Lahiri hit a brilliant second shot from 269-yards to nine feet and he holed it for a closing eagle.

Indian-Americans Sahith Theegala carded a superb and flawless eight-under 64 to rise to T-12, while 18-year-old Akshay Bhatia emulated his first round 66 to get to 12-under and at T-18.

Stuard, who began the day five shots off the lead, hit only 10 of the 14 fairways off the tee and had six birdies, including three straight on the front nine.

Third-round leader Sam Burns struggled to a 72 that left him tied with Kristoffer Ventura (66) and Harry Higgs (70) at 15 under.